The Difference Between Single Malt and Blended Scotch Whisky

One of the big things that both long-serving, and newer whisky drinkers ask me is about the difference between Single Malt and Blended Scotch whisky so today I'm finally getting around to writing it up so there is a reference point for it on GreatDrams.

The whisky world is not created equal, and there are ironies within the industry that many whisky drinkers simply do not understand, especially around the difference between Single Malt and Blended Scotch whisky.

Blended Scotch whisky has been around for around 300 years, but has only been created commercially since 1840 thanks to the first Master Blender, Andrew Usher. Before this, whisky from single distilleries – single malt, of sorts – were so random and inconsistent in flavour that trying to sell them was nigh on impossible because, in no small part, the flavour variance between batches was significant meaning that one batch of whisky from Distillery X may taste great this week, but next week it may be like fire water.

I’m telling you this because to understand the difference between Single Malt and Blended Scotch whisky properly, you should understand how the categories evolved.

So what is the difference between Single Malt and Blended Scotch whisky?

The two basic types of Scotch are:

Malt whisky has to be distilled in pot stills, grain whisky is usually made in column stills.

Here’s the crucial detail that defines the difference between Single Malt and Blended Scotch whisky:

Some of the best examples Blended Scotch Whisky

And we have our very own Blended Scotch whisky too: 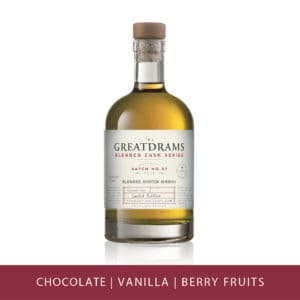 We have approached this Blended Cask Series Release a little differently, using one grain component, a 13 Year Old from the North British Distillery and two Single Malt components – an 11 Year Old ex-Bourbon cask from the Glen Moray Distillery and a 7 Year Old 1st-fill Ruby Port Wine Barrique from the Knockdhu Distillery. The resulting flavour is smooth, easy-drinking with notes of chocolate and berry fruits along with a vanilla sweetness to round it off.

Some of the best examples Single Malt Scotch Whisky

And we have our very own Single Malt Scotch whisky too: 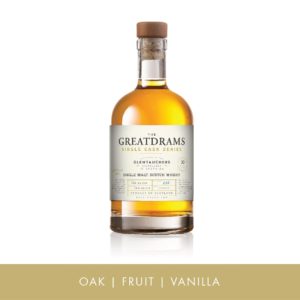 This Single Cask Single Malt Scotch Whisky was distilled at the Glentauchers Distillery in Speyside. We loved the vanilla oakiness on the nose, and the sweetness that gives off memories of penny sweets come through too with a juicy green apple note and a smooth, fruity and creamy palate with a slightly spicy finish.

There are five whisky categories that you should be aware of:

The hierarchy of whisky bottling types 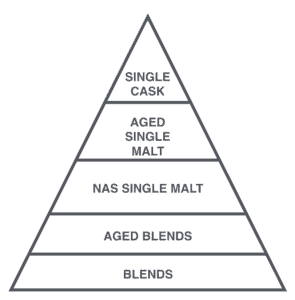 For some additional context around the difference between Single Malt and Blended Scotch whisky, let’s talk about age, maturation and some production quirks

The requirement to mature whisky for three years minimum was not passed into law until the Immature Spirits Act of 1915, yet as we know whisky itself has been around for two or three hundred years. However, whisky in the eighteenth century was largely referred to as ‘fresh from the still’ as it was effectively new make or very young spirit.

The Immature Spirits Act came in to pacify the then Chancellor of the Exchequer, Lloyd George, who was a passionate anti-boozer who felt that the ills of alcohol were damaging the United Kingdom during World War One almost as much as the enemies they were fighting at the time. He did have a point; there is credible evidence to suggest that young, unmeasured spirit caused a lot of damage to individuals’ bodies, hence the term ‘blind drunk’, to the extent of making them unfit to help in the war effort. Lloyd George proposed an outright ban on alcohol during the war, a prohibition of sorts, but that was met with the obvious outcry you’d expect from a nation partial to a tipple or two. Then stepped in a chap called James Stevenson, a whisky man who went on to become the chairman of Johnnie Walker but at the time served the war effort by overseeing the Ministry of Munitions. He pointed out that without alcohol production during the war, there would be no alcohol available to make high explosives or anaesthetic amongst other things. A deal was struck. The man had a point.

In one simple twist of legislative fate whisky went from being a menace to the British society of the time to being a thought-through, planned and quality product.

So essentially, if you boil it down, the three year minimum maturation period for whisky was enacted to slow supply in order that the government could stop drunk folk handling munitions during the First World War.

Whilst the romance of ‘bottled when ready’ is lovely, the reality is a lot more practical and rooted in political tussles, as so many things in today’s society are.

And why is this important? Because this is why Blended Scotch Whisky became so prominent at the time – Single Malt Scotch Whisky could not be trusted not to hurt those who drank it, whereas Blended Scotch Whisky was much more balanced, gradually turned heads away from cheap brandy and cognac – helped massively by the phylloxera parasite that swept through Central Europe decimating vineyards through the late 19th Century – and was easier to drink and to enjoy.

If you were alive in the 19th Century you would only have known about blends, single malt as a commercial product and category within the whisky market has only existed for a few decades.

William Grant & Sons are credited as one of the companies behind this market innovation when they released Glenfiddich as a brand in 1963 and product to sell through surplus stock instead of simply being a component in their volume product of Grant’s Family Reserve (known as Stand Fast back then).

The big irony here is that Grant’s released Glenfiddich they ran with a campaign titled “You may never stand for a Blended Scotch again” thus ensuring that consumers saw Single Malt as superior to Blended Scotch Whisky. While we are here, let’s have a quick word on age in whisky

Blended Scotch Whisky and Single Malt Scotch Whisky is commonly bottled at ages from 10 to 21 years, but there are also younger and much older ages. The current record holders are bottled at an age of 75 years from a G&M release of a Mortlach single cask.

Most casks have previously held American bourbon, but also sherry casks from Spain are common. To a lesser extent other cask types like port, madeira, rum or wine are used as well. Most whisky casks are re-used several times by distilleries.

Maturation takes place in warehouses. The traditional dunnage warehouses have stone walls and an earth floor which is believed to create perfect conditions for maturation. But there are also modern racked warehouses with concrete floor and steel walls where casks can be handled by forklifts.

During maturation, the clear new spirit extracts flavouring and colouring substances from the cask that are both from the wood and the remains of the previous cask filling. Because the casks are not totally airtight some of the spirit evaporates during maturation.

This is called the angels’ share, depending on the climate and the location of the cask in the warehouse this loss is typically between 1% and 2% per year.

There you have it, a full guide to the difference between Single Malt and Blended Scotch whisky as well as a load of context to put into perspective why the two spirits exist and the various quirks around their production and legalities.

In case you want to try a grain whisky, we have bottled one of those too: Drams like this, with its smooth palate laden with creme brûlée and vanilla notes, are far too rare to burden with heavy-handed words, as Chaucer might have said. Here you have a bottle of whisky from a now-silent distillery, which means there is not only no production there any more, but the whole site has now been torn down so no more Port Dundas whisky will ever be produced.