I love Laphroaig. There I’ve said it. The distillery is one of two spiritual homes of mine (Anfield being the other) and I simply love all their product releases so to get to try some pretty incredible stuff that is rarely part of other tastings made this an epic tasting at GreatDrams HQ. Now, I’ve often described Laphroaig as my ‘spiritual home’ in whisky, which has a lot to do with the iconic Laphroaig 10 being the whisky that convinced me that drinking and exploring whisky was a good idea and that it should be enjoyed and savoured – although I’m not ashamed to admit that it took a few efforts to get on board with a whisky that, at the time, was the peatiest I had ever tried.

Laphroaig is a malt that epitomises a good whisky. It is well renowned and respected in the whisky world and the Laphroaig 10 Year Old is one of the distilleries finest malts. From the very beginning of tasting the 10 Year Old, you are hit with an explosion of smoke.  It is full bodied and packs a delicious punch. It harkens towards its coastal home with hints of seaweed piquing the taste buds, a saltiness that is soon followed by a delightful vanilla sweetness. This is a brilliant Scotch with a beautiful palate that invites the drinker to analyse it and love it!

You can tell it is a younger than the 10 Year Old, not yet defined whisky but it already has some character to it with a vinegary nose that evokes sawdust and maybe a hint of dried fruits.

The palate is very sweet and sour, iodine notes as expected but with white pepper and smoky finish.

Definitely a good recreational whisky that you should have in the house, unlikely to be one for special occasions but for those of us that like a wee dram of an evening you cannot go too far wrong with Laphroaig Select. Probably would not go too far out of my way for it… and when I see it on an back a pub’s back bar or whisky list I always have an inner sigh for what might have been if they had the Laphroaig 10 Year old in. This is an in home one for me, not when out. 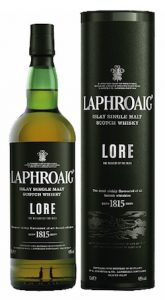 With Laphroaig Lore being bottled at 48%, this thick, chewing dram packs a bit of a punch, whilst living up to what makes up his criteria for a good Laphroaig.

Laphroaig Lore’s nose gave away floral, dry notes, sweet cold-like sensation the more you take in whereas the palate was all about dry salt that lingered long in the throat with hints of cayenne peppers and liquorice, coating the mouth in an oily texture. This was one of the first super premium whiskies I ever owned, and ended up losing that specific for a year actually when I hid it from myself in a Laphroaig 10 tube so stop me getting through it too quickly… how great did I feel when I found it again when we moved house!

The nose of this whisky is soft, giving off rubbery smoke, burnt pineapple, grassy, kiwi, subtle orange notes, cinnamon, cloves, ground nutmeg, signature TCP notes, and the palate is also quite soft, with smoky wisps and thick, treacle notes. Oh so delicate fruity notes that linger along with the smoke and grows into a softly spiced long finish. I have never tried this Laphroaig before, and am pretty sure I did not know it existed until the sample arrived – what have I been missing?! Well… the nose was a lot deeper than the 25 Year Old with a sharper note of peat reek, dried coconut chunks, soft grassy notes and the odd highlight of peaches and pears but mostly it’s got quite a strong peat influence for its age.

The palate was sweet, so much softer than the nose, the smoke and peat play second fiddle to the vanilla sweetness and burnt sugar, nay creek brûlée note I’m enjoying. A smoky brûlée, yes please. Minimal spices save for a slight peppery note on the shorter than expected finish. What a whisky.

All in all a fantastic range displaying the variety and richness that can be achieved from peated whiskies, the Laphroaig 10 Year Old will always have a place in my heart, but the 25 and 27 Year Olds were absolutely superb, and Lore is a very welcome permanent addition to the range. What to you think of Laphroaig? Let me know in the comments below.

10 Unexpected Irish Whiskies you have to try

What you up to for Burns Night? Here’s where to go in London…

6 thoughts on “A review of the Laphroaig Range”