Women in the Whisky World – From Female Distillers and Beyond

It seems like everywhere these days people are trying to be more inclusive and encourage diversity. Championing Women in the Whisky world is no different.

Why does it matter?

The change has even touched the world of Whisky, and we are seeing women and their contributions being celebrated across the industry.

Of course in an ideal world we would live in a meritocracy, where people would get along based solely on their talents and abilities, and hard work.

But the fact is that we don’t live in such a world and it genuinely is harder for women and minorities to achieve certain successes. That doesn’t mean it’s not hard for people outside of these categories, just that they don’t have this added disadvantage.

As we become more aware of the disadvantage, many new stories are being heard and new voices are emerging.

The Whisky industry is not immune to this and we’re now paying attention to some really incredible women in the whisky world to hear what they’ve got to say.

Whisky has long been seen as a men’s club; whether that involves drinking it or making it, the image has stuck. Female distillers have often seemed like a rarity.

But it hasn’t always been that way. There have been some big names in the history of Whisky who have changed the industry. Take Bessie Williamson from the Laphroaig Distillery on Islay. She started off as a secretary and ended up as an incredibly influential distillery manager.

She impressed Ian Hunter, the Manager before her and when he died, he left her the position and the distillery to boot.

Bessie was highly revered in the business and even toured with the Scotch Whisky Association, giving lectures on Whisky distilling. Laphroaig flourished under her leadership.

They were producing massive amounts of spirit and still couldn’t keep up with demand. Helen and Elizabeth Cummingshave also had a massive impact on the success of Cardhu Distillery.

Helen was known for her ability to avoid the taxman and to let her neighbours know he was coming as well. She would raise a flag as a signal and distract him so others had a chance to hide their stills.

She was in charge, despite her husband owning the distillery and she is often included in tales of its success.

When she died, she passed it on to her daughter in law, Elizabeth, who really took charge and transformed the business.

Elizabeth had a keen eye for opportunity and she expanded the distillery, selling old stills (to William Grant as he was building Glenfiddich) and bringing in two new ones.

Under her watch, Cardhu became a massive success and was enjoyed up and down the country.

For many women in the early days of Whisky making, they oversaw the running of their husbands’ distilleries.

They might not have had ownership of them by law, but they certainly took charge.

Ellen Corrigan was an enterprising woman who more or less ran Bushmills Distillery in Northern Ireland after her husband died.

She transformed Bushmills into an international Whisky and made sure she was part of the process by getting a spot on the Board of Trustees when she stepped down from operations.

Ellen was smart and made sure to make the distillery a limited liability company so they could trade internationally.

Who knows what might have happened to Bushmills had she not been at the helm; especially considering how many Irish distilleries shut down at the turn of the century.

Elizabeth Walker was also instrumental in the creation of Johnnie Walker, which is currently the biggest selling blend in the world.

She worked alongside her husband and sons to craft an amazing recipe that was well loved.

Helen and Elizabeth Cummings were also important to the Johnnie Walker story, since John Walker bought Cardhu from Elizabeth and used their malt to creat his blends.

The brand of course brought out a blend recently called Jane Walker, which faced a lot of backlash from women who thought it was condescending.

The irony, as pointed out by the Sydney Morning Herald, is that they have a history of great women that they could have honoured, but missed the obvious chance to do so.

Women in the Whisky World Today 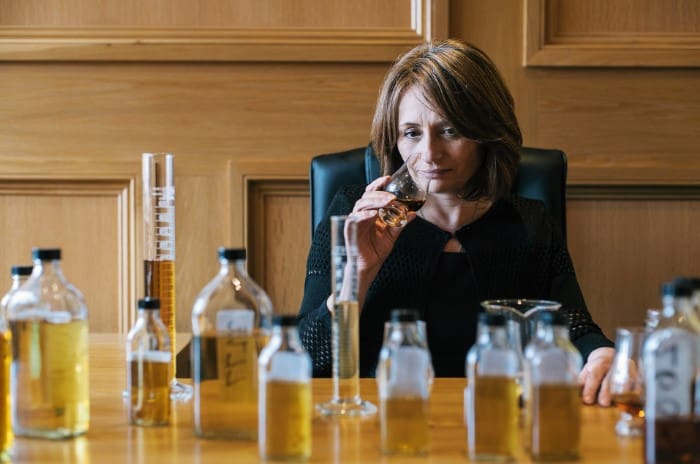 So with so many great women having lead before, it’s no wonder we have a line up of greats currently taking charge across the industry.

One of the most well known names in Whisky is Dr.Rachel Barrie, Master Blender at Brown Forman, covering the Glenglassaugh, BenRiach and Glendronach distilleries.

She has been in the game for decades, having previously worked for Glenmorangie and Morrison Bowmore.

She describes why the Whisky industry hasn’t previously been a place for many women; “You might have worked your way up from a warehouseman to a mashman and so on,”

“There were very few if any women who got in. That route was closed.”

This is a sentiment echoed by Heather Greene, author and Whisky expert, in the same article, “You do have to hit the ball harder,”

“I knew that I had to be better. Its just part of the game.”

Stephanie Macleod is another big name in the industry, working as Master Blender for Dewar’s.

She recognises the need to encourage women in the industry; “It’s very important to me and the company I work for that we encourage women into the spirits industry, and in particular the technical/operational side of the whisky industry.”

With this statement, Macleod addresses the fact that women are underrepresented in the industry, especially on the operational side. This is an issue not only affecting the Whisky industry, but also other areas based in STEM (Scence, Technology, Engineering and Maths) subjects. Progress for Women in the Whisky World

Macleod herself has been in Whisky for a long time, since 1993 in fact, and has created a well respected reputation for herself.

It also means she can see progress. All the way back in 2012 she was quoted as saying; “The number of women now working in the industry is growing. It’s such a big employer, we’re really seeing the numbers coming through and things are definitely changing.”

So there is definitely change being made, despite how hard it might appear.

Macleod and others like her have made a big impact on the industry and the drinks we consume daily. Macleod herself has worked in Craigellachie and Aberfeldy, and many more besides.

There are many women appearing on the Whisky scene, not just as creators but also consumers and enthusiasts.

The image of Whisky as a man’s drink and a man’s industry is crumbling at the minute, and it’s all the better for it.

Tags: WhiskyWomen of the Whisky Worldworld of whisky