A newbie’s venture into the world of whisky

I've drank whisky.  A lot of it. For a long time. By Joanne Allen.

I enjoy whisky… but recently I decided I wanted to do more than enjoy it.  I wanted to experience it. My love for whisky came, sadly, before I even tried it. 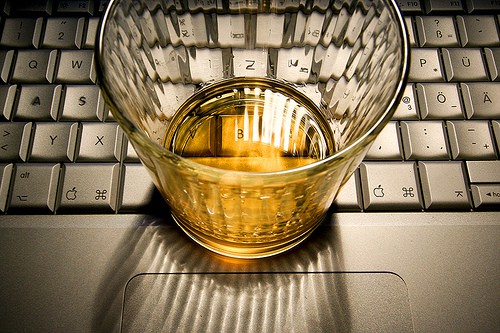 I’ve always had a dream of sitting in the corner of a dim lit jazz bar, neat whisky in hand and a big fat cigar.  The fact I’m not some 1930’s gangster but actually a 5’3 petite woman who chokes at the mention of cigarette and is blind as a bat was never an obstacle for me. A dream’s a dream right?!

I’m not going to lie… I’ve longed to walk in to the house and in a ‘Mad Men’ manner, crack open the decanter, pour a good slug and knock it back without my face and mouth ending up in a seizure-like predicament.

So, I recently decided to man up and take the step into the serious world of whisky.

I am a complete novice when it comes to ‘tasting’ but still an enthusiast who is willing to encounter many seizure-like flails in order to learn more about whisky and find my preferred ‘tipple’.  I started small and purchased a trio of Glenfiddich 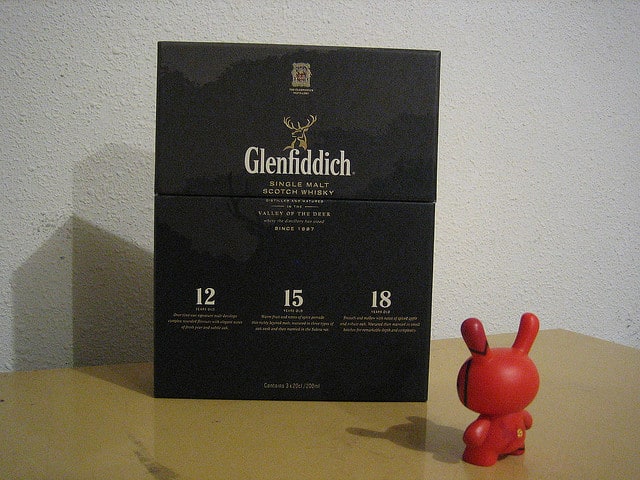 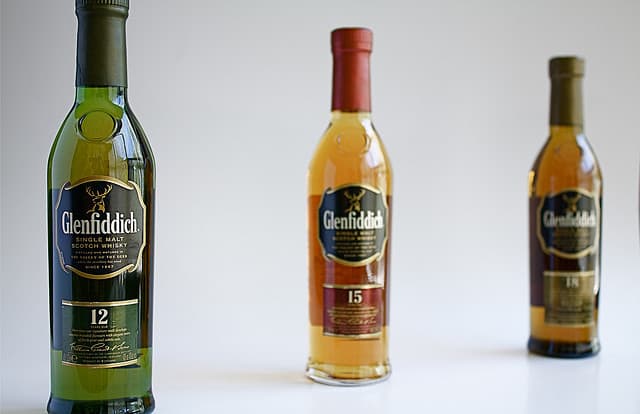 Before I started my journey I decided to swot up on the proper way to ‘taste’ whisky.  ‘Things you’ll need’ ranged from tulip-shaped glasses and whisky (bit obvious isn’t it?) to friends and tissues to wipe away any excess drool post-whisky session.  By the end of my ‘webucation’ I’d picked up the key terms ‘nose’, ‘palate’ and ‘finish’ and proceeded to throw these terms into every conversation so to let everyone know of my new Whisky Warrior status.

Come whisky tasting night and I’m as excited as a kid in a candy shop.  I prepare the glasses, set out a bottle of mineral water and lovingly line up my 3 little bottles…

Now, during this time I somehow came to the conclusion that this would be best done with a few family members so that:

b) well…. when they heard the word ‘whisky’ I was pretty much given no choice anyway.  This is a decision I would soon regret.

Matured for at least 12 years in American and Spanish oak casts, Glenfiddich describe this as:

Lining up the glasses, we start with colour.  Swirling the whisky to let it breathe, the family quite calmly settle on golden honey. So far so good!

Many say you should always first taste a dram neat, but as this was a younger whisky (and because we were a little scared) we decided to add a splash of water to ‘bring out the blossom’.

We stick our noses into the first glass with our mouths slightly open, as instructed from various sources.  Everyone takes a deep sniff in, actually a little too deep, as the room suddenly erupts into a dramatic orchestra of wheezes, choking and coughing.  Working through the tears, Dad, a non-whisky drinker, throws out that he was getting a ‘woody’ smell.

As I desperately try to calm everyone down by distracting them with my new found whisky knowledge, advising everyone how to properly ‘swirl’ and ‘nose’ the 12 year old, I look over to find my beloved mother had already shot hers back.

Cue 5 minutes of ‘No! Bad Mum’ before we finally get back round to our little ‘tastings’.

I tell the family that the next step is to sip and ‘chew’ the whisky.  Clearly they forgot where they were and mistook this for a wine tasting.  I can tell you, there’s nothing more frightening than to close your eyes to enjoy a good hhisky and suddenly feel surrounded by 5 Hannibal Lecters… sleepless nights follow I can tell you!

Then, like magic, the room cleared and the ‘notes’ started to come out! 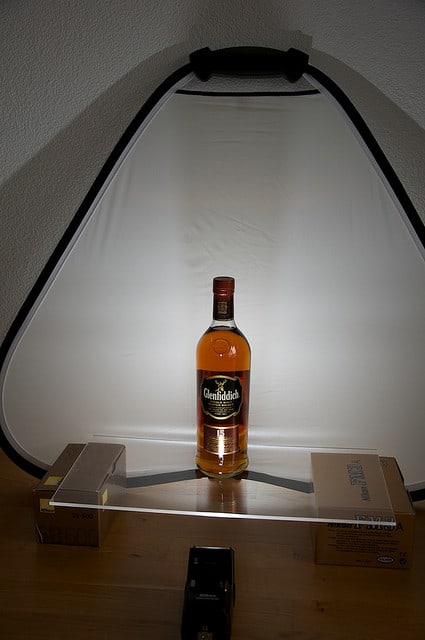 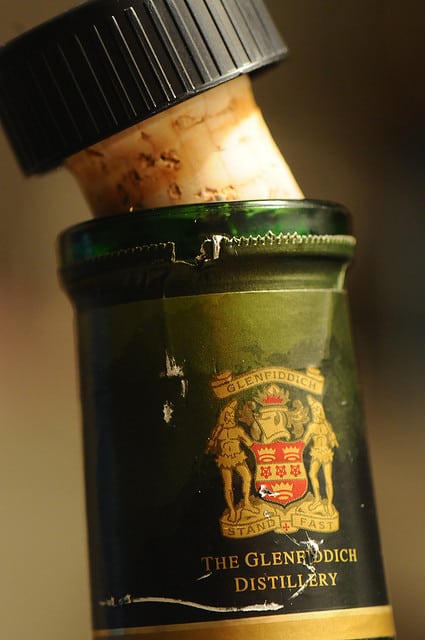 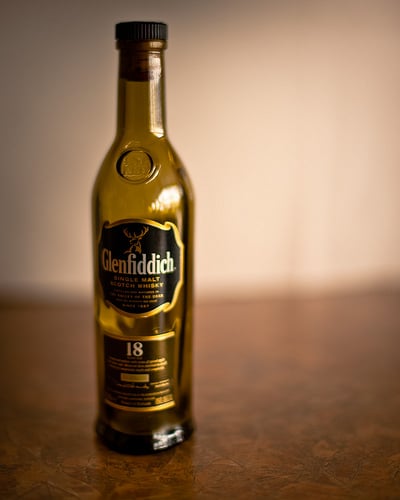 Mum could taste ginger and cinnamon. My partner hesitantly throws out banana. I tell him that there is no wrong or right.  It all depends on the drinker’s palate (check out this expert, eh?!)

Desperate to throw in something daft like “dettol”, I reminded myself that this was no laughing matter and restrained myself (anything for a chuckle).  I definitely noticed a subtle pear.

My dad, who doesn’t drink whisky due to a “mishap” when he was a teenager and swears he never will again, is caught stealing my mums halfway though.  He gets an oaky, rich taste after the initial burn and adds that it lingers on the tongue for quite a while after.

My family seem to have gone from amateurs to connoisseurs in a matter of seconds (no one likes a big head).  Aged in European, American, and New American Oak to release the virgin cask flavours, Glenfiddich describe this one as full of “warm and spicy flavours”.

This time we mustered up the courage to take this sans water.  And what a good decision that was!

Dad started by adding that it looks like pine (think this guy has a wood obsession), whilst mum adds it reminds her of buttercups.  This one is definitely less thick than the first.  My partner is smelling honey.

Best I could come up with was more ‘orangey’ (I’m like a modern-day Shakespeare).  The family found this one a lot easier on the nose… maybe this was because we’d singed our nostril hairs previously…..or maybe the family were actually adapting.

Mum has suddenly turned into the Socrates of whisky philosophy, pointing out that it looked like oil on top of water, followed by 5 minutes of the family having to watch her ‘re-enact’ this in some odd dance interpretation.

Everyone definitely found this dram a lot mellower and sweeter – bar dad who exclaimed that he thinks he’s just swallowed fire!

My sister found it quite herby, zesty and not as smoky with a nice kick at the end.

Following a quick Lindt Chocolate break, which everyone decides we should rate as we’re now suddenly world class Food Critics on top of Whisky Connoisseurs.

We start on the 18 year old

Mum starts off by noting its bronze colour.  She adds that she can’t see the alcohol falling as much… I’m quite shocked she can see anything at this stage to be honest. My partner smells cherry and apple.  I get the apple too but find it quite potent on the nose… my dad apparently just smells fumes!

Our first ‘chew’ and everyone agrees that this is a lot sharper than the 15 year.  It’s got quite a fruity kick. Mum can taste Apricot.  A lot of us get Apple. We all find that it has a much shorter aftertaste.

Funnily enough, the 18 year old proved the least popular, with Dad stating that it ‘stripped the moisture off the tongue”.  Maybe this was because we’re not used to it yet.  Maybe it was because we were smashed by this point. Who knows?!

In the end, the 15 year old came out on top with many of the family returning for a sneaky glug until I had nothing left but sweet memories.

So, there you have it, my first ‘proper’ Whisky tasting experience. I use the term ‘proper’ quite loosely. I learnt that whisky tasting should be fun.  It should be taken seriously, but not too seriously (as you can see from my family).  If done right you can open up a world of taste you never really get the chance to sit back and usually experience – even as amateurs we found that there were common flavours and aromas that did come out – so we couldn’t have been doing it all wrong.

And whisky tasting with others CAN and should be enjoyable… unless it’s with my family… that’s a whole different ball game, my friend!

So, what was your first Whisky Tasting experience like?