I’ve never really explored bourbon to any great degree previously, I have always often for Scotch, Irish or Japanese but I have a policy when I’m abroad: only consume what the locals have made, and with this my rather intense quest to find the top five bourbons was underway.

Important to note that I have had a couple of bourbons over the years but I have not had the chance to spend time trying the brilliant wares from different American distilleries, until now.

It happened by chance in all honesty, on a recent trip to NYC

I booked us into my favoured brand of hotel, The W Hotel, on Lexington Avenue and upon arrival discovered to my amazement that the hotel bar was not only in the top five whiskey bars in Manhattan but it is called ‘Whiskey Blue’, which I think is a not-so-subtle way of trying to tether their reputation to that of Johnnie Walker Blue which, if I’m honest, is completely justifiable.

Bizarrely it took me nearly forty-eight hours to venture into the very well designed and near perfectly curated whiskey lounge due to the inconvenience of having tickets to the Mets and whatnot. But, after returning from a ridiculously amazing six course tasting menu with accompanying Châteauneuf-du-Pape at the River Cafe, I ventured in to the until-now mysterious space that may hold the answers to many of my bourbon questions, but that would near-definitely raise more questions and curiosity levels than it could ever resolve.

So, I should probably talk about my quest to find top five bourbons then eh?

The menu itself was an intriguing mix of bourbon and rye ranging from $12 to $45 a measure, although I later found that there were two on the shelves that were not on the menu and retailed at $100 per measure.

Yes, I tried both and many more but here are a couple of highlights.

It really is an incredible rye, the palette evokes strong reactions. When it hits your mouth you get a rich yet velvety sensation, you can tell it has been matured ten years with an unfolding story that keeps you interested long beyond that initial sip.

This rare release of Willett Rye has been aged in white oak for four years, and hand bottled at cask strength from a single barrel. Inviting aromas of spice, vanilla, caramel and butterscotch lead to a bold, peppery palate enhanced by hints of cinnamon, tobacco and clove. 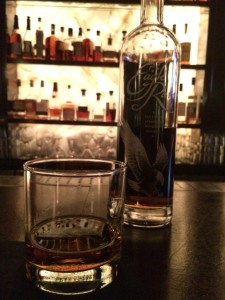 The Buffalo Trace distillery produce this whiskey in Frankfort, Kentucky, one of the oldest and most historic of distilleries in the USA with roots that go back to the 1700s. There are some really great Bourbons out there that are far beyond the usual £20 bottle, but this particular Whiskey has a complexity and smoothness that is way beyond it’s price point.

Eagle Rare 10 year old, single barrel, Kentucky straight bourbon whiskey has a sweet, oaky nose and full, complex body. Reminiscent of a fine port wine, this rare whiskey is best served neat, or over ice. Of course, feel free to drink Eagle Rare in such classic cocktails as the Manhattan or Whiskey Rare.

Maker’s Mark, long famous for their flagship marque, recently introduced Maker’s Mark 46, the first new product in over 50 years from this distillery. Charred French oak staves are inserted inside the barrel and an additional 2 to 3 months of aging have created a bourbon that is both true to the classic Maker’s Mark heritage and yet a world-class whiskey on its own merits.

In December 2009, one taste of the new product said it all – ”We finally got it right.” Tasting Notes Aged To maturity Proof 94 Aroma Pleasant, sweet, toasty oak nose with caramel overtones. More intense aroma without an alcohol nose. Taste Rich, creamy seared-oak flavors; caramel and vanilla notes linger on the front of the palate.

A statement from Heaven Hill

“…We’ve carefully identified several hundred that are at middle to high storage in our best rick houses, and these will be the source for these very special future Elijah Craig Single Barrel editions. These are some of the best older barrels of traditional rye-based Bourbon we have in our inventory.”

Tasting Note by The Chaps at Master of Malt Nose Notes of plum jam leading to mixed nuts and a dollop of vanilla toffee. Palate: Menthol and vanilla greet the palate first then comes white pepper and cedar wood. Finish: The finish is spicy with Cognac leathery notes to boot. Overall: This Bourbon has so much going on and shows its age incredibly well, top marks!

This one caught my eye for its obvious distinguished visual standout but also as I had heard some mythical mention of the Usquaebach in whisky folklore so did some digging post-sampling to find out what it was all about.

In fact, the name Usquaebach is derived from the ancient Gaelic phrase, “uisge beatha” meaning water of life, from which the word “whisky” evolved. Usquaebach, once reserved only for royalty and aristocrats, was first introduced in the United States at the 1969 presidential inauguration. The origin of Usquaebach traces back to the early 16th century, during the reign of Mary Queen of Scots.

The blend itself was all about spice; peppery nose with christmas fruits and a hint of coffee. Once on the palette there’s a certain saltiness to it, a sense of seaside holidays with lots of sherry notes that is certain to warm you up on a cold winter’s night.