Thoughtpiece on Women and whisky

The great cliché of the brooding man, wistfully staring into the distance as he contemplates life over a straight Scotch is coming to an end.

Like most of society, the whisky world is catching up with modern times and doing away with the out-dated image of being exclusively for the male of the species.

Gone are the days when whisky was restricted to the glasses and decanters of rich old men.

Some might have expected the change to come sooner, since some of the best distilleries as well as the methods of distilling, have been run and created by women. Really the brooding figure of the man should never have appeared.

And considering that recent estimates show women to make up at least a third of worldwide whisky drinkers, it is an image that is very quickly changing.

The title of Fred Minnick’s book Whiskey Women: The Untold Story of How Women Saved Bourbon, Scotch, and Irish Whiskey speaks for itself.

And this is not an occurrence relegated to the past either. Only the experience of women in the whisky world is becoming an ever more modern event. One need only give the term “women and whisky” a quick Google search and up pops several blogs written by women who invest their time in appreciating a good dram.

But women are not only talking about whisky. They are getting involved in the making of it too.

Having held the position since 2011, and previously holding the same at Glenmorangie since 2003, Barrie is no newcomer to this title.

Her whole career life has centred around whisky and how it is made. Straight out of university she began working for the Scotch Whisky Research Institute.

From here she moved into the distilling world, and has been blending some very fine drams ever since. 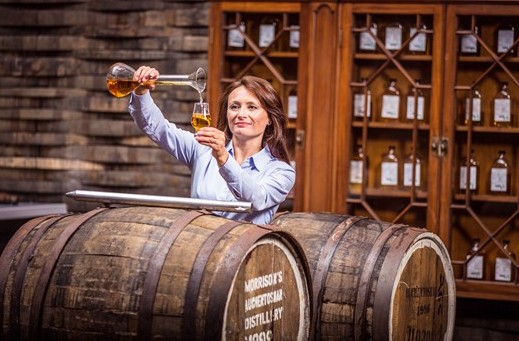 We should also consider Allison Patel, who not only appreciates a fine whisky, but also took the initiative to found her own distillery.

Brenne Whisky, situated in France, was officially released in 2012. But do not be fooled by its relative youth and newness. Its release came with rave reviews and praise for its founder.

Having already started her own drinks import business, Patel used her sources and know how and turned them into something she loves, whisky.

Barrie and Patel are not alone in their love for the water of life. They are amongst many women who have dedicated their working lives to whisky.