An evening with Glenfiddich at world famous Bell Foundry in Whitechapel was always going to be incredible, especially after a beast of a working week and then to find out that they had a Steve Jobs-style ‘one more thing’ moment in the reveal of the new Glenfiddich 18 packaging was utterly superb.

The evening started with cocktails and canapés, some really nice miniature food, in fact I am near-100% confident that it is impossible to be anything other than happy when you’re eating miniature food, but I digress.

Following conversations with Mark and Alan about how whisky brands live and breathe in supermarket environments and how the best brands empower and train staff to pass on the brand’s message, we sauntered down to the workshop setting to find a stage, a couple of chairs and a row of fantastic single malts lined up. 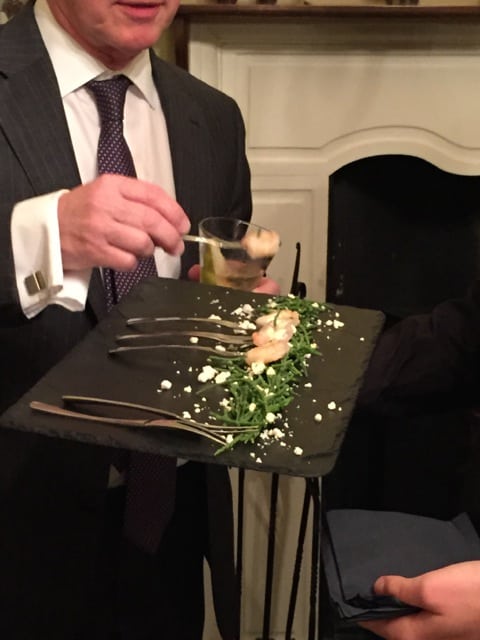 The big surprise here for me was the 26 being on display, at £349.99 a bottle and having. Been away during the main product launch phase I had not had a chance to sample it yet and could not wait to get involved.

Mark hosted the evening and between him and Alan they discussed the journey each company had taken to get to where they were today and how much pride there was in longevity of family ownership.

In case you are unaware, the Bell Foundry has been around since 1570 and is officially Britain’s oldest manufacturing company. They forged the Liberty Bell (some irony there that the Americans had their Liberty Bell forged in the UK, no?), they created Big Ben, Bow Bells, bells for Westminster Abbey and various other notable bells around the world.

Alan, the current head of the company, told us a lovely story that really hit home at how special it is to be a part of a family-run business that spans generations, let alone five centuries:

I love that the first thing every single person in the UK hears every single year is the chime of one of our bells as Big Ben rings out on TV and radio.

Such pride was evident throughout the evening and as you look around the space, which in itself was reminiscent of the intricate and intimate parts of traditional distillery operations.

The family run business that spans generations, monarchs, and effectively has existed through several iterations of London itself, is a natural link to Glenfiddich who, as you likely know, as a company spans now six generations dating back over 125 years to 1887 when the distillery was built literally by hand by William Grant, his wife, his seven sons and two daughters.

Nowadays it is only a slightly different story in that the process and component parts of the whisky creation are still as true to their origins as possible, they even have their own cooperage on site and currently hold over 900,000 maturing casks in their various warehouses.

A few fun facts about Glenfiddich:

So with innovative histories comes an expectation for innovative futures and they definitely delivered on that tonight.

Two different Glenfiddichs, one sherry and one ex-bourbon married together with a small percentage finished in new casks. Incidentally the Solera vats that Glenfiddich pioneered have never been empty since installation in 1997 so the flavour will keep getting more complex with each release.

A very spicy dram, earthier than the visual, nuttier than expected and richer due to a higher level of sherry.

I have to admit that I have not always been a fan of this dram in the past but tonight it felt and tasted a lot better than I ever remembered it. Mark described it as a Christmas whisky with a lot of oak influence. Sweetness, fruity, almost on the verge of being too sweet but tonight that’s ok.

A handsome, stubby and highly giftable whisky, a relation of the 12 Year Old and 30 Year Old and well worth a try and a buy. Spicy, salted caramel, vanilla, complex layers and a well rounded finish.

Then, wow. The unveiling of the new Glenfiddich 18 packaging.

This may not sound like a big deal to most but bearing in mind I work in the design industry as a brand strategy consultancy and regularly work on new packaging design briefs, this was a great and thoroughly unexpected highlight to the night.

Words can do so much but check out the gallery below for the new look and feel, I’m sure you will agree it is gorgeous and really does step the 18 Year Old into a more super premium space within the range.

Our final dram was one I definitely had not expected to taste tonight but it was great and even led me to buy on the very next morning as it was so impressive.  A very fruity palate, super soft on the nose which was unexpected, soft tones with charred pineapple finished with some spice. What a dram!

With that we finished the evening and chatted informally for a bit longer before I had to head off.

Thank you very much to Glenfiddich for the invite, and especially for the surprise reveal of the new Glenfiddich 18 packaging and 26 Year Old