In a unique combination of the processes that make Bourbon and Single Pot Still Irish Whiskey, Sunshine Reserve is aiming to offer something a bit different to Whiskey consumers.

With the plethora of new distilleries that are popping up, especially in New York where Sunshine Reserve are based, it can be hard to offer something new. This is what the brand is trying to do and in the process they have a made a very different Whiskey.

Under the category of American Whiskey, which is a catchall for Whiskies made in America, this is definitely giving us something different form the usual malts we find in the States.

It has been matured in baked oak casks rather than charred so there’s no smoke but a lot of sweetness. The mash bill is also made up mostly of oats, which is rare in American Whiskey brands. It also contains rye, spelt and malted barley.

They might sound like minor changes, but these differences in process also effect the flavour of the Whiskey, especially the use of barrels with no char.

Sunshine Reserve is obviously very different from most Whiskey made in America.

The flavour is great, and has a lot going for it but the mouth feel is a little thin. 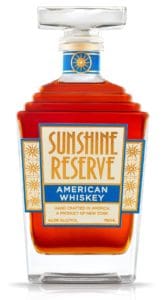 The nose opens with lots of fruity notes and a lovely hint of brown sugar. It is sweet from the get go, but not overwhelmingly so.

Dried fruits such as raisins, apricots and figs appear, adding a bit of density to the flavour.

The palate is well sounded, with big, bold notes of caramel and vanilla. The wood of the casks very obviously shows its influence in the sweetness. Marzipan, vanilla cake, more dried fruits and lots of cinnamon and nutmeg all come out. These are warming flavours that complement the sweetness. Fresh fruit flavours including apple and pear also appear, adding another level to the taste.

The finish is strong but does not hang about for long. It is full of thick caramel and vanilla.

This is one of the more interesting malts to come out of the craft Whiskey boom and is well worth exploring.