In an attempt to explore how Whisky is affected by the wood of the casks it is matured in, independent bottlers Gordon & MacPhail have embarked on a project called Wood Makes the Whisky.

This is an exploration of how different casks will affect different expressions from a range of distilleries.

They have just recently released three new expressions, a Glentauchers 1996, a CaolIla 2004 and a Glen Elgin 1998. The Glentauchers 1996 release hails from the Speyside distillery that was founded in 1897.

This dram is a typical Speysider with lots of light fruity flavours and some lovely spices in the background. It has been matured in first fill Sherry butts.

The nose is full of fruit and nuts, with deep Sherry tones bringing it altogether.

There is a lot of cinnamon and nutmeg spice to add a warming note o the fruits. These are focussed on dried raisins and citrus fruits such as oranges, with a slight hint at apple and sultanas.

On the palette these flavours become deeper and richer, with a dark chocolate and coffee flavour really coming through. The raisins and sultanas are thick and juicy and dusted with more cinnamon.

The citrus fruits become candied orange peel with some green apples to add a nice tang to the undertone. The orange and dark chocolate go especially well together.

The finish rounds off with a lasting impression of bitter dark chocolate and a hint of liquorice. 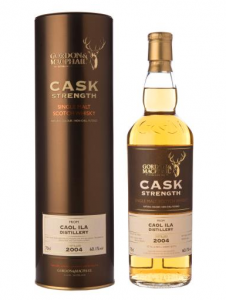 Hailing from the rocky shores of the isle of Islay, this is an impressive malt, with lots of big seaside notes and a wonderful dose of peat. It has been matured in both first and refill Bourbon casks.

The nose opens with slightly fruity notes of apple and pear, with an undertone of lemons and limes. These add a delicious bite that you can really sink your teeth into.

There is also a thick maple syrup aroma that is sweet and dark. It is slightly warming and has a delicate earthy hint to it.

The palette introduces us to a wonderfully smoky and charcoaly flavour that gives a nice edge to the dram.

The fruits are bursting with flavours and are joined by bananas and yet more citrus fruits such as oranges.

These have a nice sweetness to them that is saccharine but not overwhelming.

In the finish, the smoke is given a great edge with some cinnamon and paprika spices. It lingers just long enough to have you reaching for more. This Whisky hails from the centenary year of the Glen Elgin Distillery and is a fantastic quality dram. this expression has been matured in refill Sherry casks.

It opens with a nose of Sherried fruits including apples, sultanas, prunes and raisins. These are moist and spicy, with a lovely warming hint.

There is also a nod towards orange and lemons, giving the nose a little bit of zest to go with the spice.

On the palette there is a more chocolaty flavour that is creamy and smooth. It is sweet rather than dark and lends a great mouth feel to the whole dram.

This is complemented by some more citrus fruits and sherry spice. Candied orange peels come in with a little bit of lemon zest and a sprinkling of cinnamon to warm everything up.

There are also some dark summer berries like damsons and blackcurrants that add a wonderful texture and flavour to go with the lemon.

The finish is medium in body but has a lovely warmth to it, coming from the spices and a lovely smoothness from the chocolate.