Comprised of five distinguished single malts, the range has been crafted with inspiration from each element, including heavily charred oak and, unusually for Tomatin, peated malt.

Each of the Five Virtues malts comes with its own distinct complexity and character; Wood has been aged in French, American and Hungarian oak casks, while Fire is matured in heavily charred oak, simulating fresh vanilla flavours.

Earth exhibits rich and intense peaty flavours as a consequence of maturing in peatdried malted barley casks and Metal is expressed by the distillery’s 12 beautiful copper stills. Completing the series, Water is distinguished by its naturally pure soft water from the Alt-na-Frith burn, which is drawn year round but employs a winterdistilled spirit to enrich the final flavour.

Now if that were not enough, this special collection of single malt Scotch Whiskies have each been ‘paired’ with a unique interpretation of the element which inspired each release by famed artist Eva Ullrich who has brought each production element to life beautifully. Her art has been woven in to the design of the bottle labels, and indeed the boxes the bottles are presented in to give an evocative representation of Wood, Fire, Earth, Metal and water.

I’m always intrigued by whisky and artist collaborations, and this one stands out to me as one where the artist really gets the influences of the different ‘virtues’ of whisky production, ano has spent time understanding their effect on the end result whilst trying to capture the essence of each’s flavour profile. Ultimately I can only congratulate Tomatin on five fine releases that look great! 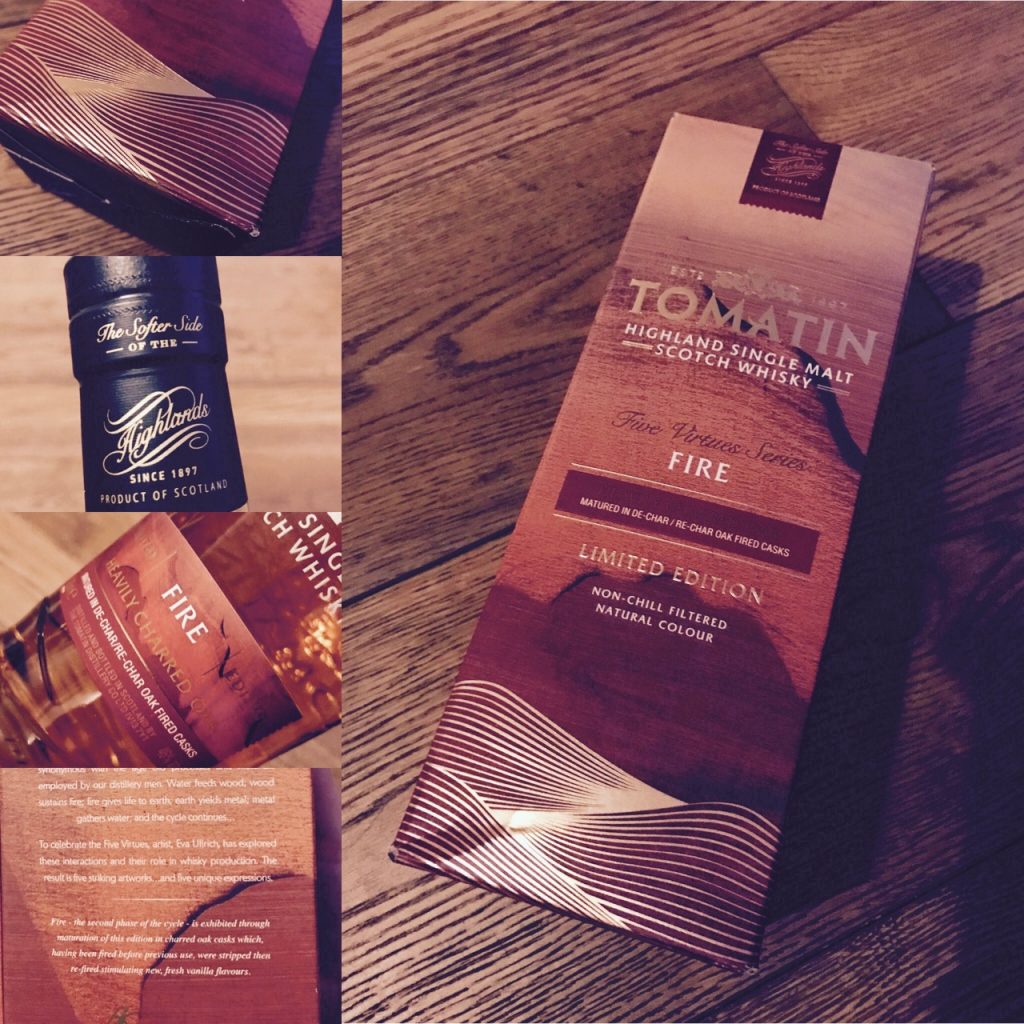 Here I’m going to take a look at the Fire edition as the packaging is pretty cool, and the liquid, matured in heavily charred casks, is great.

What I like about this release is that it is, from what I recall, the first time the term ‘de-char / re-char’ has been used on front of pack, something that a lot of whisky folk will get, and will understand; the rejuvenation of the char inside the cask to pimp up the boldness of the liquid and extract even more vanilla and natural flavour from the casks.

The gold foiling on the waves at the bottom of the out packaging (the box) is really nice, tactile and adds depth to the overall look and feel of the product.

And the line on the next label is a really nice, smile-raising descriptor of the whisky, reading:

“The Softer Side of the Highlands”

A line that truly delivers with this delicately vibrant single malt filled with oak char, vanilla notes and stone fruit notes along with a lovely waft of smouldering embers.

Overall it is a great product in this price range, and the series is an interesting one; look out for a range review on GreatDrams in the near future…

“As our brand grows we are increasingly inspired by global concepts and the Five Virtues series was born out of this inspiration. We wanted to release a creative limited edition series focussing on the effects of different cask maturations, while linking it to a wider concept. That is something that we have achieved with Five Virtues and we are incredibly proud to be launching the series onto the market this month.”

The unique design concept for the packaging was brought about through a fruitful partnership with abstract artist, Eva Ullrich. Eva was tasked with visually representing the five elements and the complexities within the different distillations involved in the series.

“Having spent many years in Scotland and enjoying a nip of whisky myself meant this project was a pleasure to work on. I’m really excited to see my work on a medium that is more accessible to the public and for it to be appreciated by people who perhaps wouldn’t usually engage with abstract painting.”

Tomatin recently won Distiller Of The Year 2016 and Brand Innovator Of The Year 2017 at the Icons of Whisky Scotland Awards. Tomatin currently ranks in the Top 10 Single Malt brands in the USA and is one of the fastest growing in the UK.

The Wood and Fire expressions can be enjoyed now, from £49.99, while Earth, Metal and Water will be released later this year. For additional information please visit www.tomatin.com/5virtues