The Macallan is one of best-known and well-respected distilleries in Scotland.  It may not have the same sales figures as some of its competitors, but it definitely has the quality.

It was first built in 1824 and was originally called the Elchies Distillery, since it was situated on the Easter Elchies Estate.  It eventually adapted the name Macallan-Glenlivet, as many distilleries did at the time.

Since then it has come into its own and dropped the Glenlivet suffix.

This is one of the biggest distillery estates in Scotland and The Macallan are very proud of the outstanding beauty of their surroundings.

The Macallan is based in the Speyside region of Scotland, and it captures the light and floral characteristics that the area is known for.

In its 1824 Series they have sought to capture the very nature of The Macallan, and with this succeed in capturing the heart of Speyside.

There are nine expressions in the range.  The first four are named for their natural colours that developed in the barrel and from nothing else.  As you move up the range the colours intensify, as does the flavour.

The next five all have a little something extra to them and are exceptional malts.  They also come in specially crafted bottles. Gold is the first expression in the range.  The nose is filled with citrus fruits and sweet caramel tones.

The oak of the barrel is immediately present, with a nice vanilla depth to it.  This intertwines with the fruit and creates a zesty, sweet harmony.

On the palate these flavours are enlivened by boiled sweets and spicy cinnamon. The spice gives the oak of the barrel some depth and develops it in a richer flavour.

Ginger root joins the cinnamon spice and is also accompanied by stewed apple.  There is a certain warmth created as these flavours combine and make a smooth mouth feel.

The finish rounds off well, with a medium linger and a slight dryness.  This is in tandem with the sweet fruit flavours and bolsters the apple and citrus. Next in line we have Amber.  This dram is somewhat reserved at first, holding back just a little.  As you really get into it, it opens up and is filled with florals and syrupy sweetness.

Citrus fruits are prominent from the beginning, with a candied peel sweetness joining the acrid tang.  This mellows out slightly as vanilla and toffee flavours make an appearance.

The vanilla is smooth and easy going.  It eventually develops and becomes hard toffee, with a lovely brown sugar bite to it.

Dried fruits such as raisins and dates are also thrown in, with a light dusting of cinnamon to join them.

These are refined on the palate, and give way to a fruitier flavour.  Citrus is joined by apple blossom and pears, with a floral undertone to give depth.

The barrel is also very present, with oak lingering around the edges.  This can really be tasted in conjunction with the cinnamon spice.

And it is ever present in the finish, only this time with a distinct malted quality.  The fruits have the last say and are light with a medium linger. 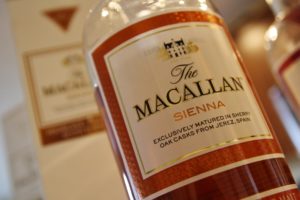 Amber gives way to Sienna, a darker expression that embodies The biggest qualities.

It is filled with a variety of fruits with a strong vanilla flavour over to start.  Green apples and ripe pears are falling from the boughs in this dram, only to be side lined by zesty oranges and limes.

The vanilla grows into a rich oak, with milk chocolate overtones that give a smooth mouth feel.  These make a nice background for the fruits to really show themselves off against.

The fruits become raisins and dates on the palate, giving this dram a certain refinement and elegance.  The oak flavours become slightly spicier and are joined by ginger and cinnamon.

Vanilla really takes the lead in this dram, from nose to palate and lastly in the finish.

There is a warm, sweet linger and you can almost taste the dying ghosts of green apples and oranges as vanilla takes the lead. The last of the drams to focus on colour is Ruby.  This is a richer and fuller bodied dram that is brimming with sophistication and poise.

The nose is like smelling an oak barrel or standing next to freshly cut wood.  This gives way to a sweet, thick treacle that is dark and luxurious.

The oak is the main charge of this dram and the wood invites depth into the other flavours.  There is a slightly spicy quality to it, with nutmeg and cinnamon making an appearance.

These are all expanded on the palate, with more dried fruits and treacle.  Raisins and apricots are present, with a hint of candied orange peels giving a nice subtle tang.

Ultimately the oak takes charge again and remains as such right until the very last moment in the finish.

The next five members of the 1824 series are all rare and handpicked.  They are elite amongst Whisky and represent the opulence of The Macallan brand. The first expression is the .  This has been created from 16 handpicked casks, chosen themselves from only 1% of The Macallan portfolio.  Rare indeed!

In fact none of the casks used to create this dram will ever be used again and as such, if you manage to get your hands on a bottle, you will be one of a very special few.

But if you do manage it then you are in for a treat.

The nose begins softly, with easy-going vanilla and chocolate tones.  These are sweet and subtle, ready to be enjoyed but also ready to give way to other flavours.

They are joined by raisins and green apples, with a hint of tangy orange and lemon to give a refreshing zesty tone.

The nose wraps up with a hint of warming spices, nutmeg and cinnamon taking the main stage.  These complement the sweeter tones and enrich the vanilla.

The palate is decidedly spicy, with plenty of cinnamon to appreciate.  This makes way for strong oaky tones that burst through.

The raisins are also there again to offer a subtle sweetness against the spice.  The vanilla and chocolate from the nose are still present in the background and work on their own terms there.

The finish is delicate and soft, just like the nose.  It is slightly zesty, but with oak giving it strength. 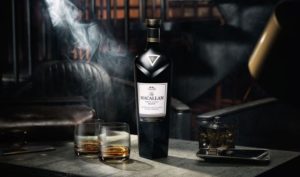 Our next venture in taste is with the Rare Cask Black.  This is quite a dram to behild and flies in the face of everything we know about The Macallan.

While it does not set aside the characteristic fruity tones, it does introduce a smoky note, something that is definitely rare for a Macallan, never mind a Speysider.

The nose combines a whiff of peat smoke with rich dried fruits such as raisins and figs.  These are complemented with a nutmeg and cinnamon spice to add a bit of warmth.

Underneath it all is that tell tale citrusy zest, bringing this smoky dram right back to its Speyside home.

The main note is of course the peat smoke and this really asserts itself on the palate.

It is thick and full bodided, giving this dram a wonderful depth and refinement.  The oak of the barrels also makes a strong appearance, with a slightly spicy vanilla tone.

The finish incorporates all the main flavours, with a last kick of smoke and tangy citrus fruits, wrapped in an oaky smoulder.

We now come to Reflexion.  This is a dram that was created to represent the natural colour and beauty of The Macallan.  It was matured in first fill ex-sherry casks, giving it a spicy fruity tone.

The nose opens with chocolate oranges and juicy limes.  The tang is wonderfully set up alongside a saccharine sweetness, filled with hardboiled sweets and toffees covered in milk chocolate.

These melt together and intertwine well with the tangy sweetness of the citrus fruits.  They are eventually joined by bananas and oak, giving the expression some rich wooded tones.

The oak becomes more apparent on the palate, and mixes well with the citrus fruits.  The tang of the limes goes perfectly with the dull oak tones.

More fruits are introduced, with ripe apples, pears and dates.  The oak also becomes slightly spicier towards the end, with a nod towards ginger root and nutmeg.

The finish is medium in length and gives the boiled sweets and hard toffee one last glimpse.

Our penultimate dram in the 1824 series is No.6.  This expression captures both the magic of The Macallan and the beauty of French glassmaker Lalique.

Matured in Spanish oak sherry casks, he Whisky is then housed in a Lalique decanter.

The nose is packed with dried fruits including raisins, dates and figs.  These are rich and sumptuous and complement the ripe juicy apples and pears that come next.

The tone becomes dark and spicy next, with lots of cinnamon and dark, bitter chocolate.

There is also a ginger aroma that is dry and ands depth and the spice.

The palate is really like a fruit cake just waiting to be cut open.  It is spilling over with raisins, apricots, dates and sultanas, all dusted with a wonerful rich cinnamon spice.

The Spanish oak of the barrels also comes through, with a wooded tang.  The spices mix well with this and nutmeg and cloves are also present to add more warmth and flavour.

No. 6 ends on a high note, with that Christmas cake flavour lasting to the final linger.  It is moist and brimming with dried fruits.

A detailed look at the Loch Lomond Distillery