Yankee Candle is by far one of my favourite shops.  Maybe it’s the pyromaniac within me, but I just love burning candles.

Nothing says relax more than candles called “Vanilla Cupcake” or “Stroll on the Beach”, or something equally as sickeningly romantic and sweet.

So with a great love of candles I was pleased to hear the candles played an important role in the Whisky world.

My pleasure soon turned to complete disappointment when I realised they were sulphur candles, and not exactly the ones you want burning all around you in the bath. I can’t say what role I expected household candles to play in the making of Whisky, but I did go on to find out more about the use of sulphur candles.

The use of sulphur in wine making began way back with the Egyptians.  Back then they realised that wine didn’t spoil as quickly when it had sulphur in it.

Today, sulphur candles are used to the same purpose.

Once a barrel has been emptied it can always be used again, and in the meantime should be properly cared for.

Part of this is preventing the growth of mould and bacteria.  I’m pretty certain nobody enjoys mouldy Whisky and sulphur candles are a way to stop this happening. 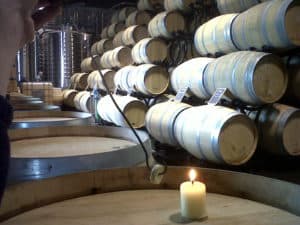 Now I’ve never been much of a chemist, but here is my attempt to explain just how burning sulphur candles helps to maintain a healthy Whisky barrel.

To begin, the sulphur candle must be placed in an airtight barrel, so as not to allow any leakages.  If you’ve ever smelt sulphur, you’ll know why.

Most people attach the candle to the bung by a wire and metal cage.  Once the candle is lit, it is lowered in the barrel and the bung plugs the hole.

To really get the full effect of the sulphur, the candle should be left in the barrel for around 24 hours.  This will give it plenty of time to burn off and create enough smoke to properly kill all that bacteria.

Just make sure that the barrel is completely dry.  If not you’ll have some lovely sulphuric acid to deal with when you open the bung, and no one wants that.

Another warning is don’t do this with a Bourbon barrel.  The alcohol vapours that come from one of these do not mix well with a lit flame.  You’ll know it’s a bad reaction from the explosion that occurs quickly after lighting the candle and attempting to place it in the barrel.

The sulphur reacts with the oxygen in the barrel and creates Sulphur Dioxide.  This will soak into the wood and dispose of any nasty bugs that may want to breed there.

Now that the barrel has been suitably sulphurised, it can be stored away between usages without fear of mould growing on the inside.

The sulphur that has been used to treat the inside of barrels can sometimes be tasted in the Whisky itself.

This is often referred to as a fiery, matchstick like taste.  This is not to everyone’s taste, but then again to others it is great!

So if you ever taste anything resembling a matchstick in your dram, at least you’ll know there’s no chance of mould!