It is no secret that one of our founders, Greg, has a more than mild addiction to Lego and loves nothing more than designing and building his own Lego creations when he cannot find an official set that gets him excited enough to buy and build it… especially as each build he does must be all about detail, storytelling and longevity of the build time, typically each should be made up of a minimum of 3,000 pieces and are often much bigger than that.

So, when, at the end of the 2021 F1 World Championship Greg wanted to build a new Lego project centred around one of his favourite sports to celebrate Max Verstappen winning his maiden title he was dismayed to find that official Lego sets were typically Ferrari or the odd Mercedes-branded scene with not a Red Bull official Lego set in sight.

That’s when he decided to whip out the Post-Its and get designing his own. And man alive did he go to town, just like when he designed the Lego distillery a few months ago.
Now, this is where it got tricky – Greg found instructions and a piece list for the car so got on with ordering (or massively over ordering as he got way too excited) along with custom decals for the wheels and the bodywork.

No bespoke design would be complete without little touches such as adding the GreatDrams logo to the sponsors on Max Verstappen’s fireproof overalls too.

No such list or design existed for the pit wall or the garage or all the scenes we know and love from watching Formula One including the computers that drop from the ceiling around the car, the intense data analytics, the team members looking after wheels and the actual pit stop where tyres are changed as well as interchangeable front wings for the cars when they are in the pit and even the air that gets pumped into the cockpit as the drivers sit in the garage keeping them cool… not to mention a cheeky cameraman mounted above the starting lights ensuring everything is captured for us, the viewers to watch in awe each race.

Greg set about buying specialised pieces of Lego, and a surprising amount of dark blue bricks from all over Europe to be able to put it all together and loved every minute of the build – all 2,500 pieces of it !

Trickiest details? The wheel rack actually – took ages to get that balanced and at the right angle whilst being fixed in place. Sourcing the right computer panels too to make sense for what he wanted to achieve with the storytelling side of racing and how teams track opposition, data, fuel and all sorts during the high pressures of the race. The removable computer labels coming from the ceiling was also a tricky challenge but one that ended up working perfectly.

Oh, and of course, the trophy podium at the back, to celebrate Max’s win of course… did you notice the blue Lego man trophy too? That’s a nod to Red Bull winning the most races in 2021. 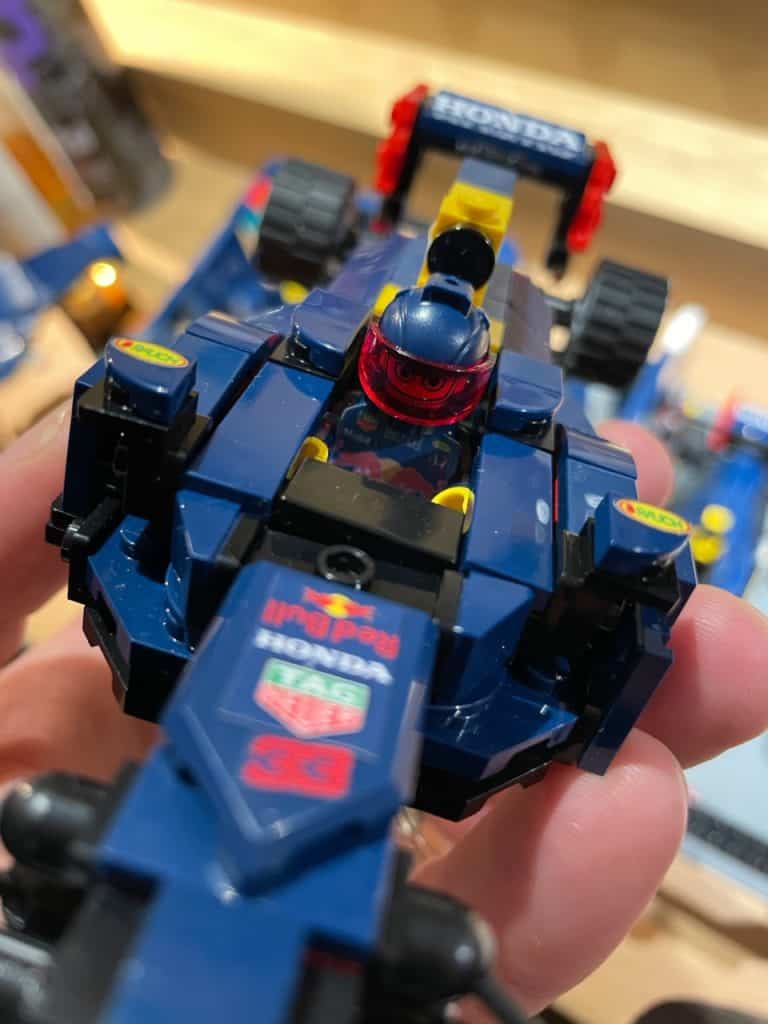