The Glencairn Glass: Everything You Need To Know

Everything has an appropriate glass that it has to be drunk out of, lest you risk the judgement of drinks purists everywhere.  Be it Brandy, Champagne or Sherry, there is some type of very specific glassware to hold it.

Up until 2001, pre-the Glencairn glass, the same could not be said for Whisky.

Whisky was consumed in every type of glass imaginable, from squat tumblers to long highballs, even your favourite mug if you were out of glassware.

Then, in 2001, someone thought it was about time that Whisky had some dedicated glassware and the Glencairn Glass was born. 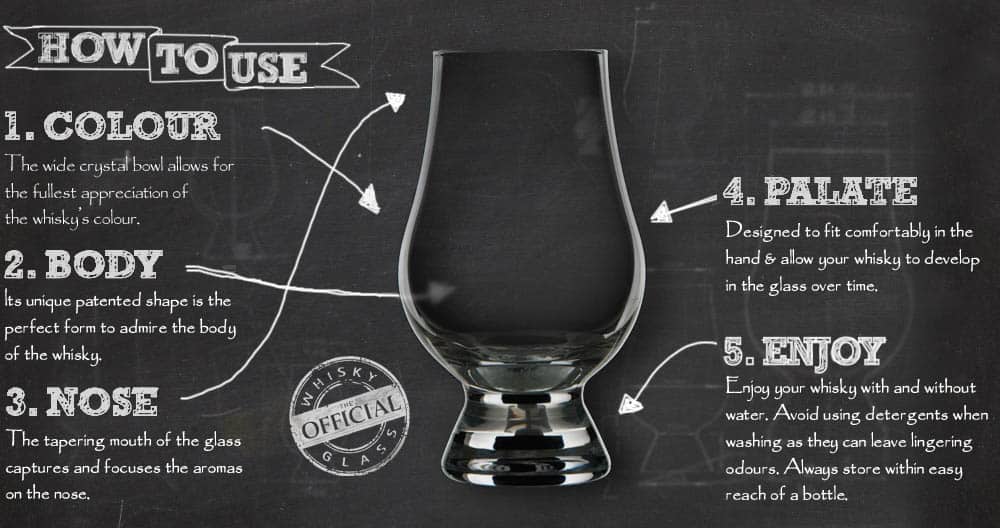 Origins of the Glencairn glass

The Glencairn glass had actually been born some twenty years beforehand but had been left in the bottom of an old Whisky cabinet, awaiting the day it could be shared with the public.

Then Raymond Davidson took his innovative glass design and dusted it off, held it up to the light and declared proudly that it was time he released this beauty to the world and improved the lives of every Whisky drinker out there.

Or something similar probably happened, maybe nothing quite so grand. He probably picked it up and thought, “hey maybe I’ll see if I can sell this”.

But whatever happened, Davidson decided to take his glass to the mass market.

He was originally inspired by nosing copitas that were usually used for sherry and wanted to design something similar.

The idea was to capture the aroma of the dram in the top of the glass so it could be easily and effectively nosed.  It also had to be long enough to be able to examine the legs of the Whisky and still hold plenty of liquid.

The glass had to also be robust enough to survive in a bar environment.  As such, the Glencairn was born and has become known worldwide as the official Whisky tasting glass.

But before it could reach such success Davidson wanted to develop his original design. In a stroke of genius he took it to those who would be using it the most, the master blenders.

They advised on how big the glass should be in order to accommodate the standard 35ml pour and still allowing for maximum interaction with the air and any water that may or may not be added.

And with that, the final version of the Glencairn was created.  The tapering mouth and bulbous bowl allows the Whisky to be fully appreciated in every way, from nose to palate to colour and finish.

It is widely known as a tulip glass and the brand has soared in the Whisky industry.

It can be found in every distillery worthy of the name distillery, right around the world, not just in Scotland.  Bars and pubs also stock it, as the thick, short stem makes it durable and easy to hold.

The Glencairn was awarded the Queen’s Award for innovation in 2006 and once you’ve tried a Whisky tasting with it, you’ll know why.

It is an essential tool for any Whisky enthusiast and if you don’t have one already then I highly recommend getting one now!

5 thoughts on “The Glencairn Glass: Everything You Need To Know”