The creation of the Glencairn whisky glass – part one

You must have heard of the humble Glencairn glass, dubbed The Official Whisky Glass which is ubiquitous in the industry and in pretty much every whisky bar in the world, more than likely you own one, several or even a hundred of these brilliant whisky glasses.

Humble beginnings forged in the opinion that whisky was to be enjoyed from appearance to nose to palate and finish, rather than just held in a tumbler and sipped.

Scott’s dad, Raymond Davidson worked for Edinburgh Crystal where he and his graphic design friend designed whisky cartons for years and years before getting in to the designing of glass and crystal. In their office they have a display on a whole wall of whisky tubes and boxes and even has the original concept Dewar’s Ancestor packaging from the 1970s that Raymond designed that had hand pushed foil and typeset letters for the branding and paintings for Johnnie Walker and J&B Christmas packs.

Raymond has been a whisky drinker all his life and one of the things that annoyed him was how a whisky would always come in a tumbler, but he preferred it in a Paris Goblet or a wine glass so he was able to enjoy it a bit more, though this was still not a great experience.

Because of this he always had this ambition to create a glass to actually enjoy whisky properly.

Where he was in the West of Scotland, a glass with a stem for whisky was not really appropriate for the clientele or the location so he came up with a design for something specific to whisky, similar to the Glencairn whisky glass they have today… but then, as he did not know anyone who could make it or blenders to test it he forgot about it and the prototype lay in a box for around twenty years as the business was all about creating boxes for the whisky industry as that’s where the money was at the time. Eventually, Scott’s brother Paul found that one sample that had been made, asked Raymond about it and and took it to show one of the Master Blenders so sought his opinion and that’s when it kicked off.

Raymond had this idea about whisky, but at the time malt whisky was not very popular and no one was really interested in it – at least not publicly – until Paul took this glass to Richard Patterson, Master Blender for Whyte & Mackay, and put the question to him to think about how he would want people to enjoy his whisky and what the perfect glassware experience should be. Paul was astounded that Patterson said pretty much point for point what the design principles of the Glencairn whisky glass was built on from day one, and Paul actually had the prototype in his pocket, which he subsequently presented to Richard, who was shocked at what Raymond had produced.

Over the course of a few months they met with other Master Blenders about it, asked what they thought and got so much support that it made sense to tweak the design and go into production.

Scott told me that “we wanted to create something iconic, unique and a sort of flagship whisky glass for the whisky industry, and we have done that – just like Brandy, Champagne and other categories already had – we thought ‘why didn’t whisky have that?’”. For me the creation of the Glencairn whisky glass is a lovely story of timing and serendipity that caught the imagination of the industry that delivered on how the Master Blenders would want their consumers to drink and enjoy their whisky.

I like how, instead of working with an agency or a marketing company as would be expected now, they did it in collaboration and for the whisky industry… simply because any third part agency would not have had the same ideas, the same knowledge and the same liquid understanding and pride to be able to deliver what was best for the product, and ultimately the consumers.

Scott notes that “this was a huge gamble as Glencairn was a small company at the time, but it took off and seventeen years later it is still going strong and the journey has been fun too. We don’t talk about what we’ve done or achieved much, we are just pleased we are going the right thing and are seen as being enhancers of the whisky industry. We take enormous pleasure out of people enjoying whisky in new and enhanced ways”.

In part two I look at the Glencairn business of today and the future of the whisky glass. 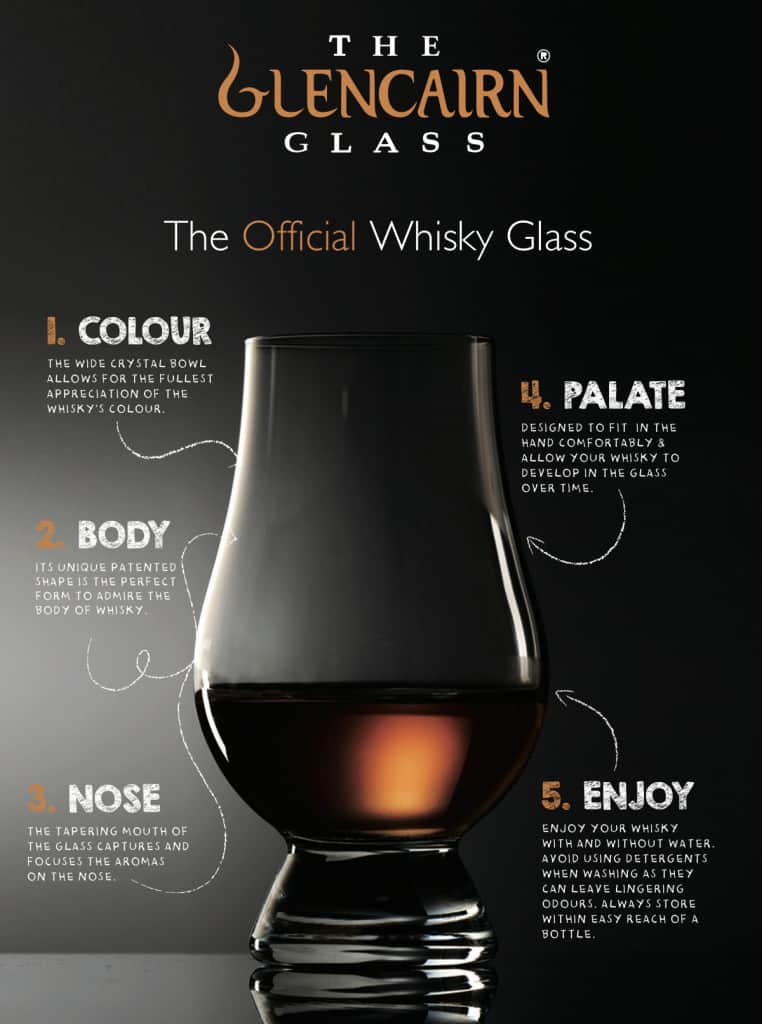 Want to know more? Take a look at Part 2 of our series!

A frankly phenomenal tasting at the International Spirits Competition 2018 dinner