Not too long ago I was very fortunate to visit The Macallan distillery as a guest of The Edrington Group which I have written about a couple of times already but in the third and final part of the ‘report’ I bring you a review from a very special tasting with The Macallan.

It was just after some lovely locally sourced soup and a couple of distillery-made sandwiches that I sat down to sample the full The Macallan 1824 range, plus a special dram chosen in response to my whisky bucket list.

There was a typical The Macallan loveliness about it all; a screen gave me a big The Macallan welcome and the tasting mat has my name on it… a small but significant touch as it symbolises the care and attention the brand gives to those who they serve; the consumer.

I was guided through my six drams by Margaret, Brand Education Manager for The Macallan and someone who’s job I’m highly envious of, especially as her first ever visit to London was to visit Buckingham Palace and meet The Queen, of course.

Here goes, The Macallan 1824 range, all matured in sherry oak. 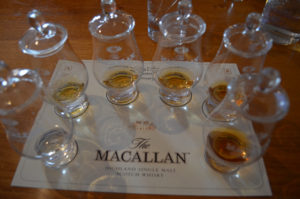 Now, I’m a weird one as I love sampling new make, there is something obviously raw about it but also it gives an understanding of the inputs that have gone into the final drams we know and love once released by any brand really.

This one was surprisingly smooth, amazingly nice to sip, especially as its so strong.

Big, bold and oily, with an undertone of fresh fruit.

Applying the ‘palm test’ where you take a couple of drops of whisky and rub it in your palms to evaporate the alcohol and give you a truer sense of the taste profile revealed high notes of barley and wheat.

Pre-drams two to five I was made to do a ‘quicky nose’ of the rest of the range to start the nose and brain contemplating how they line up and how they differ. I was shocked at how the product tiers carried more and more sherry influence as I went along the line, from second fills to mixed first and second and eventually only first fill sherry casks. Lovely.

Dram two – The Macallan 1824 Gold – 40%
The nose was also smooth, elements of citrus and not very whisky-like in my opinion, nothing that stood out and said ‘hey, I’ve been maturing in Scotland for years!’.

That being said it tracks with what other brands do with their entry level products, think Haig Club, by creating a whisky that can entice non-whisky drinkers into considering other products within the category – very smart.

The palate released more citrus notes, had a bit more punch about it with hints of vanilla and was very light in colour.

The palate brought out more and more sherry the longer I retained it in my mouth, or chewed it as us whisky folk say, with hints of orange, spice and an overall sense of Christmas about it.

Only first fill sherry casks in this one, and you can really tell, Margaret and I agreed it is an absolute bargain for the £66 price tag attached to it.

The nose is all about berries, pineapple whereas the palate takes that towards dried fruits and rich citrus, a really interesting and complex dram. Worth a try.

Now we’re talking. All first fill sherry casks again chosen from the rarest available, and personally at £120 this is an incredible bargain to be had, I know – I bought one in the distillery shop on the way out I was so enthralled.

The nose actually smelt as if you had been transported back to warehouse number seven where these casks had been sleeping all these years. Quite raw, deep notes.

The palate is all about warming, relaxed notes highlighting dried fruits, caramel and chocolate. A very mature dram and one I will savour once I get that bottle opened!

Only bottled for four years, first filled European oak casks. Sealed bottles of this guy are now fetching around £1,600 on auction sites and I can tell why.

I wrote very few notes for this one, only that it was long and continually developing… happiness in a glass.

That concludes my tasting notes.

I thank The Macallan and in particular Margaret, Morag and Ian for being spectacular hosts and making me feel more than welcome, I already cannot wait to return to one of whisky’s most idyllic spiritual homes.