A burgeoning new Japanese whisky brand, Bushido Whisky is produced in the Kumesen Distillery and has taken the whisky world by storm.

State of the Japanese Whisky Market

With the huge boom in interest in whisky these days, there has been an increase in distilleries and demand. But the number of distilleries that exist already are struggling to meet that demand, especially Japanese distilleries. This has lead to many of the best brands having to discontinue releases of certain bottlings, simply for the fact that they don’t have any more malt left, or it hasn’t matured.

The most notable example is Hakushu 12 year old being discontinued in 2019. This year we have also seen more discontinuations, such as bottle sizes of Shirokaku, Chita  single grain and blended whisky Kakubin. There is the threat that many more will come as well.

On the bright side of this, there are also a number of new Japanese whisky brands that are introducing new and exciting malt to the market. Japanese whisky has always been known as some of the best, so new brands coming on board is a really great chance for us to experience a wider range of Japanese whiskies.

This is where Bushido Whisky comes in. They are a recent brand from the Kumesen Distillery that is churning out award winning drams

The Kumesen Distillery was founded in the Okinawa Islands in 1952. Back then, when they first started, they were producing Awamori, which is made from Indica rice and is made exclusively in Okinawa. They have always been known as an innovative and forward thinking distillery, having started to age their Awamori in oak barrels in 1989.

This created a hybrid kind of spirit that was named Ryukyu Whisky at the time (the Okinawa Islands are also known as the Ryukyu Islands). This is when rice whisky was really first focussed on and Ryukyu whisky was a leader in the category.

So it is no surprise that the creations coming out of the Kumesen Distillery are still being hailed as some of the most exciting on the market. With this in mind, they have recently started the Bushido range, which is a range of grain and single malts that are very fresh and exciting. The name derives from Bushido, which is the code of conduct followed by the Samurai warriors.

The Bushido brand really started to take off only last year, when they were awarded their first accolade on the international whisky stage at the International Wine and Spirit Competition in December 2019.

With each bottling of the Bushido Series, the creators are looking to reflect one of the seven virtues of the Samurai warriors. These include integrity (Gi), Respect (Rei), Heroic Courage (Honour), Compassion (Jin),  Honesty and Sincerity (Makoto),Duty and Loyalty (Chu). So far, Bushido have released three of these; Meiyo, Rei and Makoto. Each of these bottlings will be a blend made up of seven whiskies from seven different distilleries

The Bushido Range is made up four different bottlings; the Meiyo 15 year old and 17 year old Pure Malt, the Makoto 23 year old Single Grain Whisky and the REI Pure Malt. Each one if unique and brilliant. For those unaware, Pure Malt is another way of saying Blend, that has not been used in Scottish whisky terminology for a while.

What is perhaps most exciting about the Bushido range is that they are able to offer whiskies with age statements that other Japanese brands just can’t these days/ As we explored, the Japanese whisky market is struggling to meet demand and this means that malts with higher age statements are being discontinued. This is because the higher the age statement, the long it takes to mature and that means the brands would have had to be preparing to meet such high demand back when they were first laid down to mature. Other brands (lesser known ones that are not on the international stage) have resorted to bottling Scottish malt and labelling it Japanese as they wait for their stocks to mature.

The Bushido Series, because it has been created by the Kumesen Distillery, already has that mature stoack, which is just now being released to market. Due to the relative obscurity of Kumesen, having only really been famous in Japan up until now, means that they can more easily meet demand for their product. It also helps that the malt is simply excellent.

The Bushido Series has have been collecting awards relatively regularly since their release. This is nothing new for Japanese whisky as a category, which is well known to be high quality, but for Bushido, this is new.

Perhaps the most significant is the 94.5 points that Jim Murray awarded the Meiyo 17 Year Old in his 2020 edition of Jim Murray’s Whisky Bible, which is the highest points a Japanese whisky was awarded in this edition.

As well as this, they have won multiple Golds, Silvers and Bronzes at various competitions, including Wine and Spirits Wholesalers of America Awards, International Spirits Challenge, International Wine and Spirits Awards and the San Francisco World Spirits Competition. They were also given 93 points from Whisky Advocate and have been featured in multiple publications as their top picks for best whiskies in 2019. The Meiyo 17 Year Old is being picked up as one of the most impressive grains especially.

So it’s safe to say that Bushido has been released to a good start. It is loved by critics and fans all over. 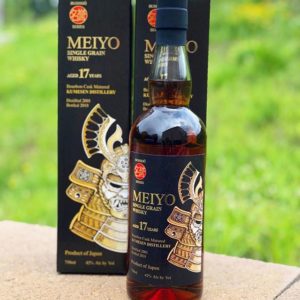 FUTURE FOR BUSHIDO AND JAPANESE WHISKY

The future is looking pretty bright for Bushido. With the Meiyo 17 Year Old performing the way it is, 2020 is looking like it might be a good year for the brand. The other releases from Bushido Series are performing well too.

As for the Japanese whisky market as a whole, this is also a really exciting time, despite the disappointments and discontinuations. There is a lot of hope moving forward for the market, with innovative malts such as the Bushido Series and things like Ao from Suntory. It might feel like a time of adversity, but there is a lot that can be done. We’re also looking forward to seeing what other brands have whisky maturing away that we might not have heard of it.

The Japanese whisky market is always one to keep an eye on, but there has never been a better time than now.

All You Need To Know About Gin

1 thought on “The Rise of Bushido Whisky”