Kamiki is one of the recent Japanese brands to appear in the global whisky boom and their blend is a refreshing addition to the market.

Kamiki have been around for a few years now and are a realc hallenger to the bug names in Japanese whisky. For decades, Suntory and Nikka were the only well known Japanese whisky brands. They dominated both internal and external markets, both due to their quality as well as the lack of competition.

These days things are changing rapidly. Japanese whisky is some of the most in demand whisky in the world right now and with that has come shortages, as well as huge growth in the number of distilleries that exist.

Kamiki is one of those distilleries and they are doing a pretty good job of finding their place on the market. They have embraced their Japanese heritage, with a focus on creating harmony through their blends, a theme that many Japanese brands cultivate.

Kamiki Distillery is found in the foothills of Mount Miwa, which is said to be the mountain of the God. The name Kamiki comes from Kami, meaning God, and Iki meaning, breath, in reference to the wind that comes down the slopes of Miwa. 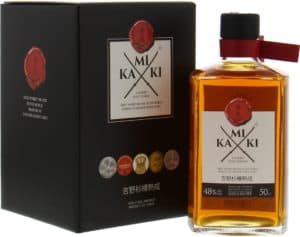 Kamiki is a really unique blend that is made up of Japanese whisky as well as malts from around the world. It has been matured in yoshino-sugi, which is a type of Japanese cedar.

The nose begins with aromatic floral notes and pine needles. There is a lovely note of orchard fruits, particularly apples, and a wonderful hint of peat smoke.

The palate is rich and earthy, with a fantastic aromatic spice to it. Florals come through really well, with cherry blossom taking the lead. Wood notes, with sweet nuts and sandalwood also appear to give it a lovely depth.

The finish is aromatic and slightly warming, with a lasting note of peat.

Kamiki is an intriguing blend to join the Japanese whisky market, offering consumers something new and exciting. We can only hope for more from them.

Are you a Japanese whisky fan? Have you tried Kamiki yet? Start the conversation in the comments!