Many of you will know that I am a proud Londoner and a proud Ealingite so when the opportunity to review Ealing Park Tavern, a reborn near-iconic gastro pub that has been completely rethought out came about, I could hardly say no.

This place held a special place in my heart as its previous incarnation had been the venue for the last two or three Mother’s Days in our family as well as many-a-Sunday Roast.

Kirst and I were fortunate enough to be invited to the launch night ahead of our review dinner so we got a vibrant introduction to a venue that is not only massive but actually delivers a lovely atmosphere to match the vast beer, back bar and menu offer.

We arrived quite early to our dinner, opting to have a drink in the bar and take in all that was going on around us – lively chatter, drink flowing, broad demographic and staff who were both competent and cared about doing a good job.

Once ready we were shown to our table, presented with near-divine bread and ordered a bottle of the house red.

The ETM Group, we learned, really put the effort in to making each of their sites different, from different cuts of meat depending on availability to taking charge of their supply chain where they can and training staff in the ways of good business and great service.

Asking our waiter for recommendations, as is The GreatDrams Way in order that the venue gets to showcase their marquee menu items, we opted for:

The burger I enjoyed was lovely, incredibly messy but lovely, leaving me feeling almost beached afterwards!

One thing I would say is that it was incredibly rich so three course really did come close to seeing me off but personally I think it was a great meal from a place that is openly in ‘beta’ or work in progress. I look forward to seeing how the Ealing Park Tavern evolves and beds in with the new concept.

One thing is for sure, the restaurant is doing really well and covers are exceeding all expectations so when you do head over, make sure you book in advance and then just go wild.

This was just a nice pub a bit far from our house, it didn’t hold any of the nostalgic memories that Greg speaks of for me. We had a Sunday lunch at the previous iteration which was nice but for me it had lacked personality, I didn’t know who they were trying to be. Having been acquired by ETM Group it’s now totally clear – it’s what Ealing had been missing.

We booked for a Thursday evening expecting an atmospheric buzz from the naughty people who still live by the ‘Thursday is the new Friday’ motto. I was shocked there was only one table left in the bar area, it seemed everyone was forgetting there was one more working day until the weekend.

The decor totally wowed me, when looking at the pieces individually from the deer heads behind the bar, the oversized armchairs by the fire and the restored barrel tables no detail has been left to chance. Which is echoed throughout our experience.

On entering the dining room we were greeted by Eddy.

As with all GreatDrams meals my attention is drawn to the tables around us, are they having a good time too?

Are they being looked after as well as us. I heard one man on another table mention the lamb wasn’t as pink as he’d expect and within minutes he had a fresh new plate, no questions asked. Their intention to make every experience a good one shines through.

I love goats cheese so opted for the Goat’s cheese tart… the tangy salty cheese with the creamy quals egg and crunch of the pastry tart was divine accompanied with the house red – a nice glass not as full bodied as I’d usually pick but very drinkable.

On recommendation I went for the day’s special which was the rump of beef.

Being rump I expected a slighter tougher cut of meat however parts of it were exceptionally tough. I like a my meat bloody but in hindsight this meat does need to be cooked through to soften so I think for my taste I should have opted for the fillet.

The flavour of the red wine jus/gravy was deep and warming, truly delightful.

I shouldn’t have had dessert as both courses had been rich and heavy – exactly as ordered!

But I could not pass the mud pie – a mouthful of this would have been enough. It’s creamy, chocolately and must be calorific. I almost think it would be worth going back and heading straight to dessert just to ensure I could eat and enjoy every mouthful.

From a couples romantic dinner, to a family get together or a friends birthday I can honestly say I think the Ealing Park Tavern can please all. 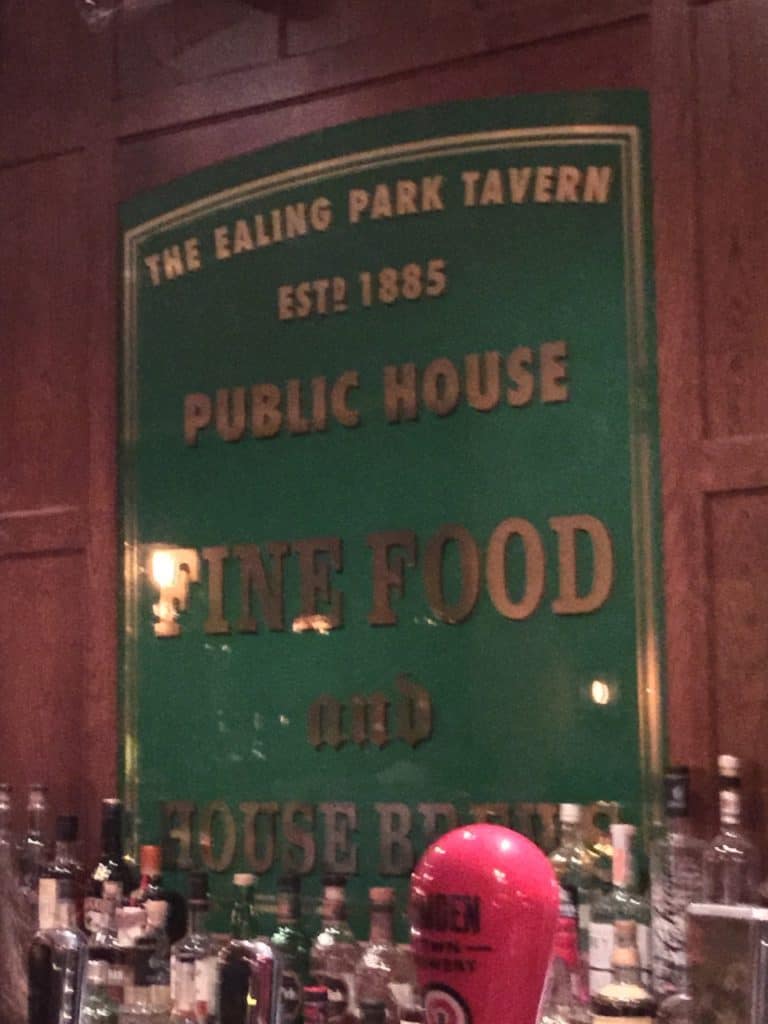 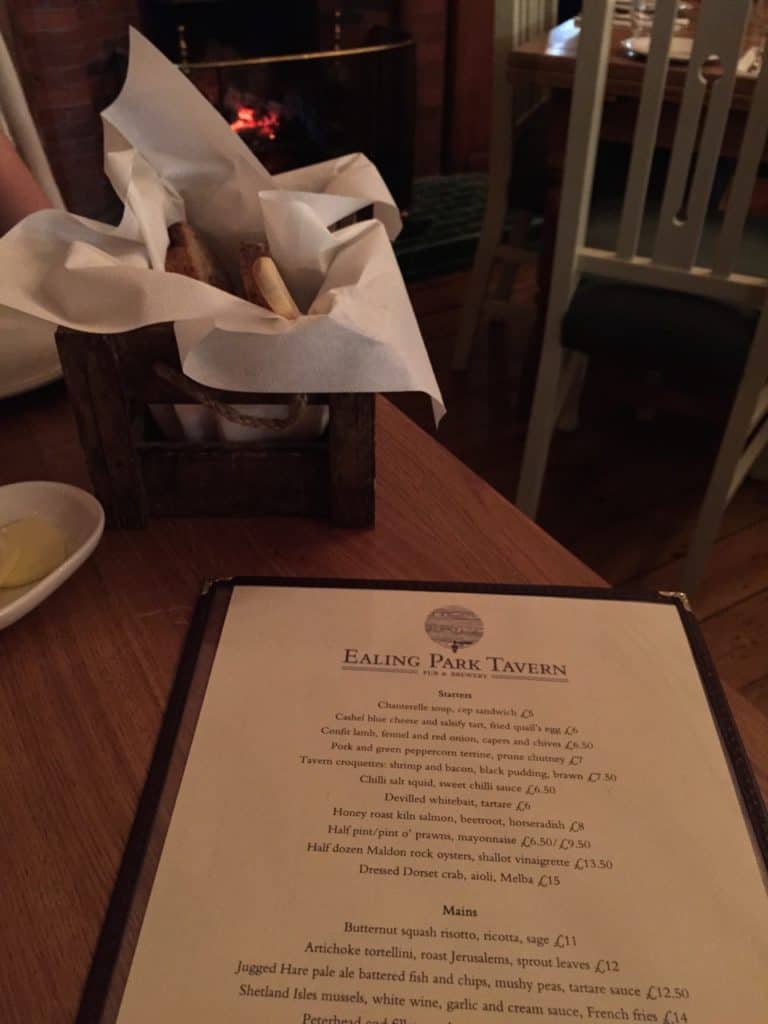 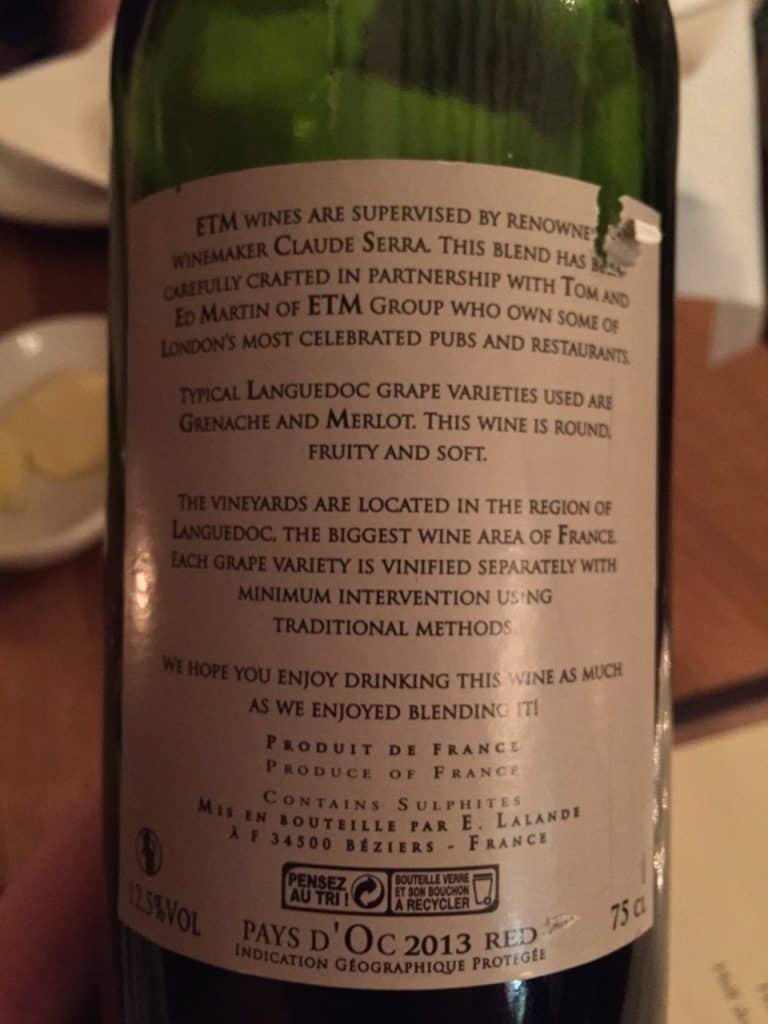 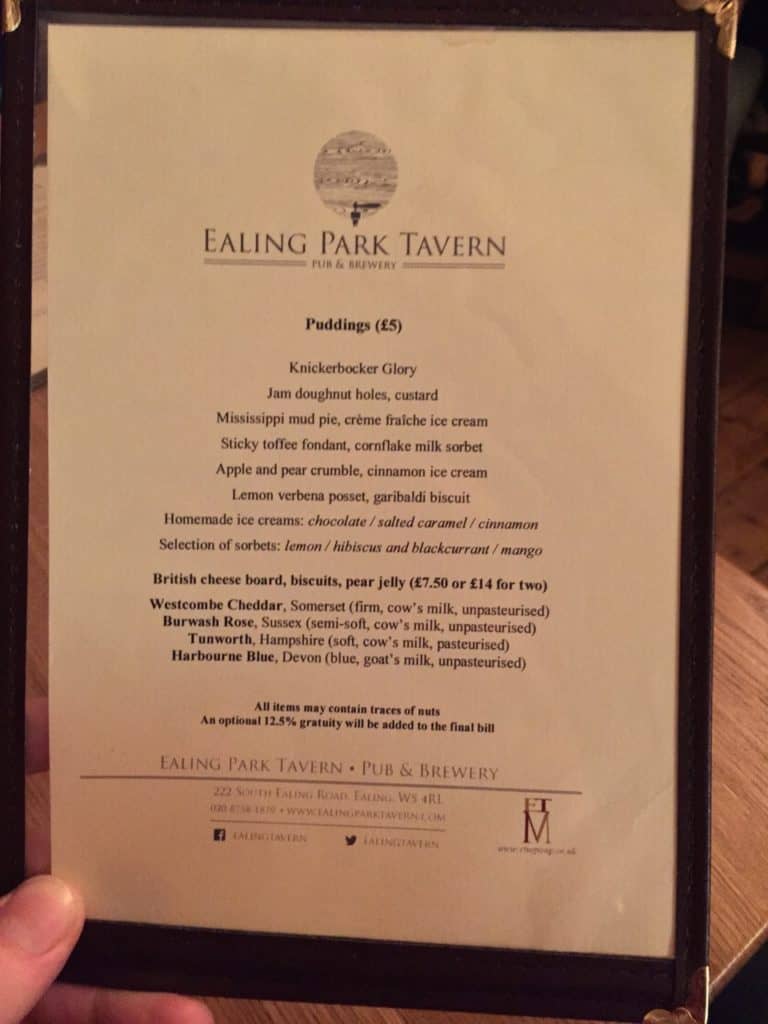 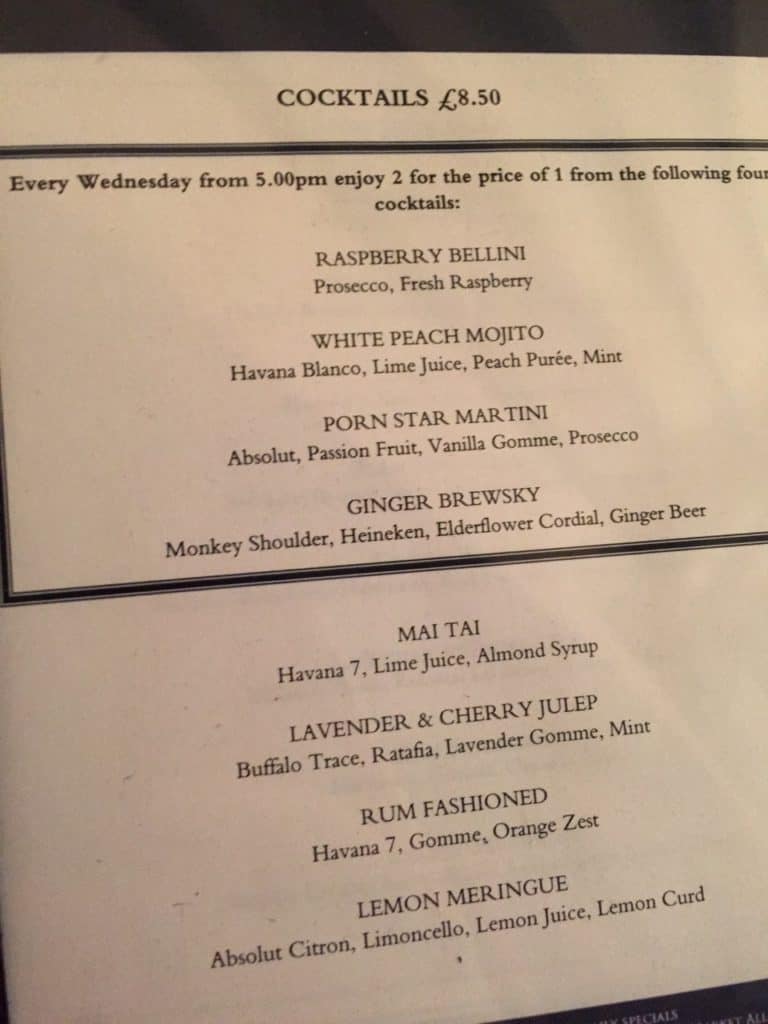 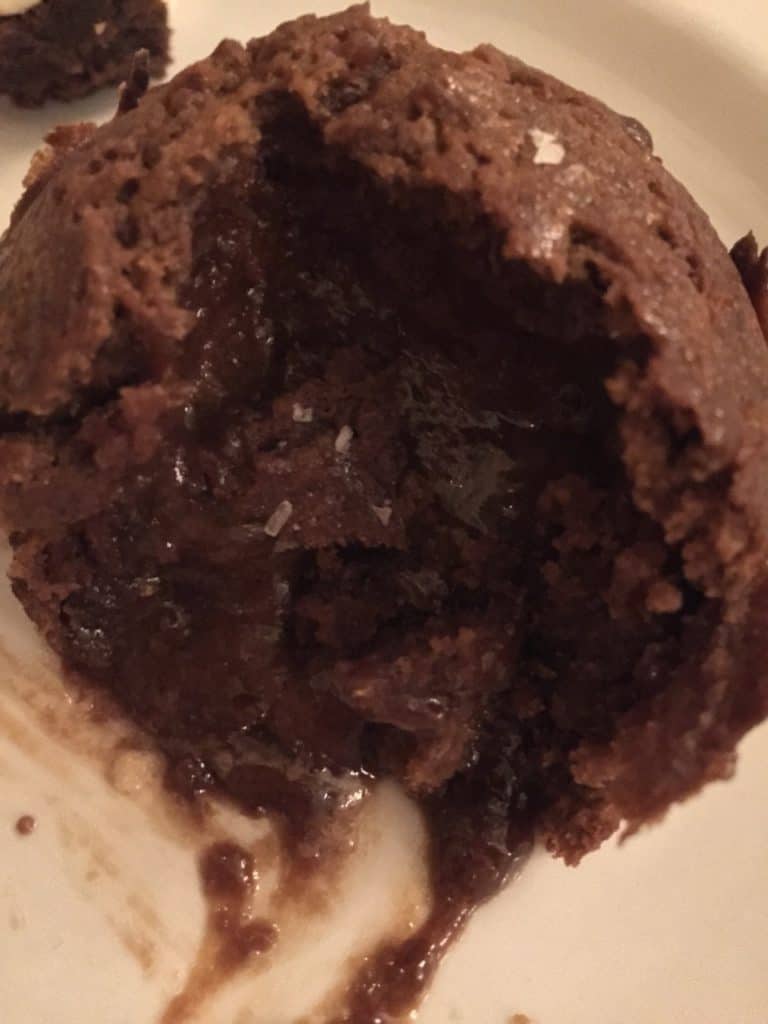 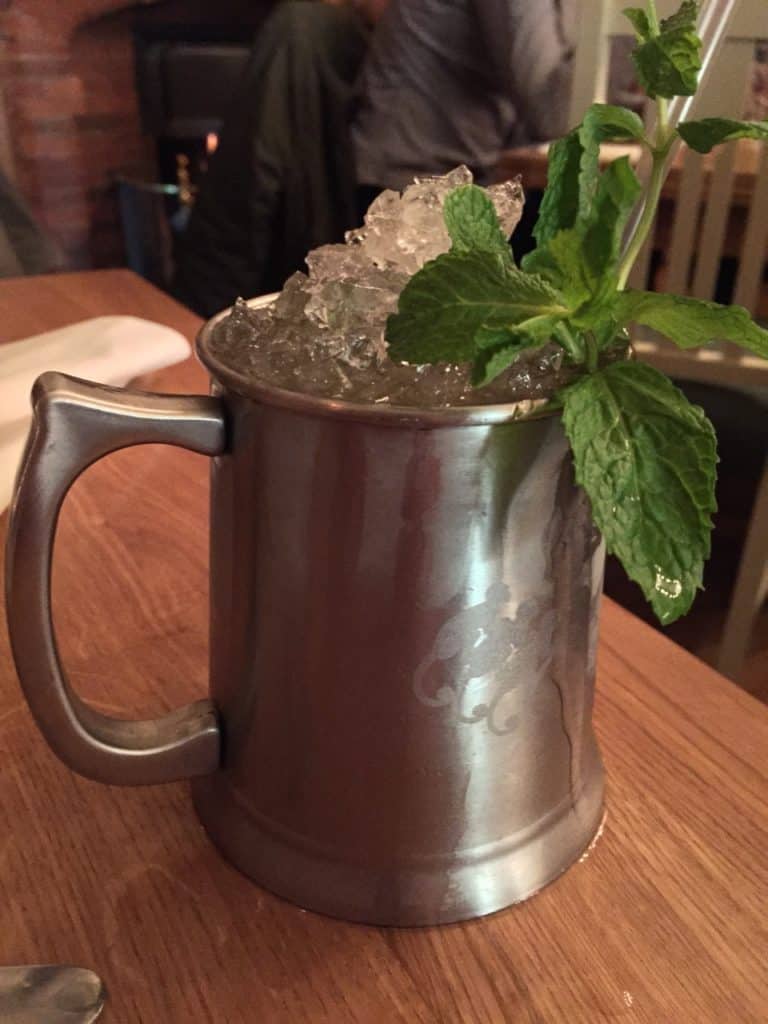 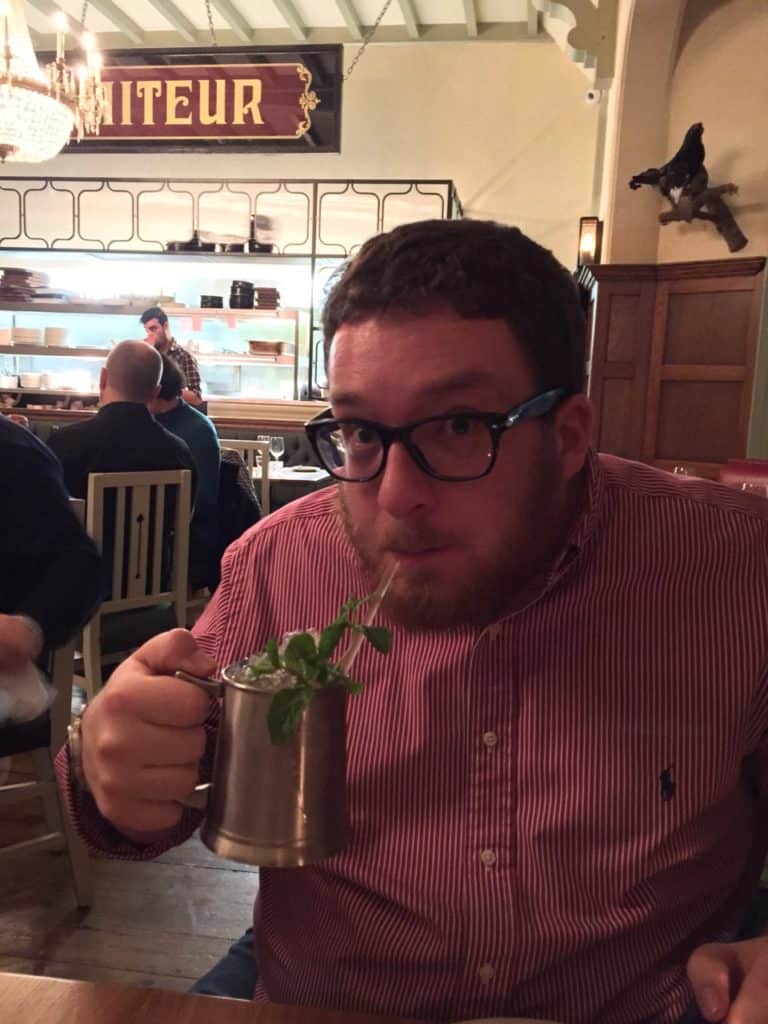 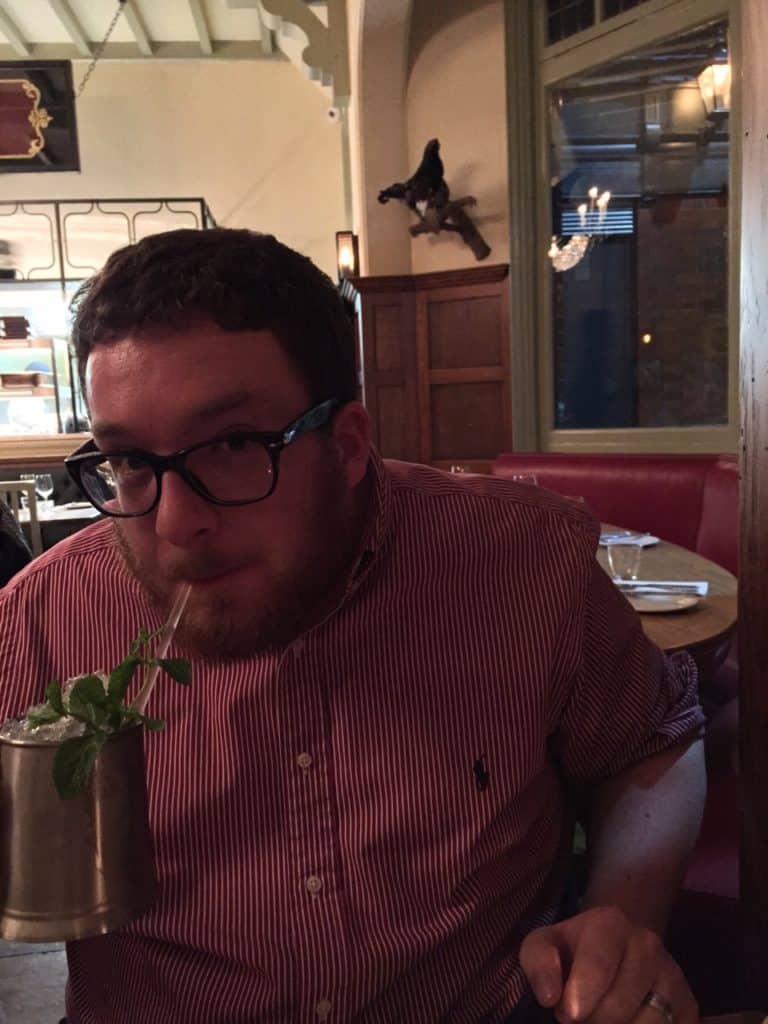