Irish Distillers, makers of some of the world’s most enjoyed whiskeys, has joined forces with Eight Degrees Brewing for a unique edition of the beloved Jameson Crested.

Launching this month, Jameson Crested Finished in Black Ball Metric Stout Barrels is the next step in an exciting collaboration between Irish Distillers and its Co. Cork neighbour, Eight Degrees, who last year celebrated eight years of adventurous craft beer brewing by releasing a uniquely dark Black Ball Metric Stout finished in Jameson barrels as the last iteration of their Rack ‘em Up Series.

Always seeking an opportunity to innovate, Jameson returned the compliment by selecting a special whiskey to mature in the stout soaked barrels. The result is a stunning evolution of Jameson Crested, with a rich stout influence married with a luscious creamy texture and lingering finish of pot still spices and malt.

“We were delighted when the opportunity arose to create a truly special whiskey,” explains Irish Distillers’ Blender Dave McCabe.

“When we were selecting a whiskey to mature in these barrels, Jameson Crested became the obvious choice. It’s higher pot still component and sherry cask inclusion allowed the whiskey to meet the impact of the stout head on, creating a balanced reaction.

“We filled the casks in November last year and carefully monitored the whiskey’s progress. After about four months of ageing we felt it was just right.  The stout influence is prevalent in the taste, complementing the whiskey beautifully.

“It’s a truly unique liquid, perfect when enjoyed neat, paired with a craft stout, or as part of a spiced cocktail,” adds McCabe. 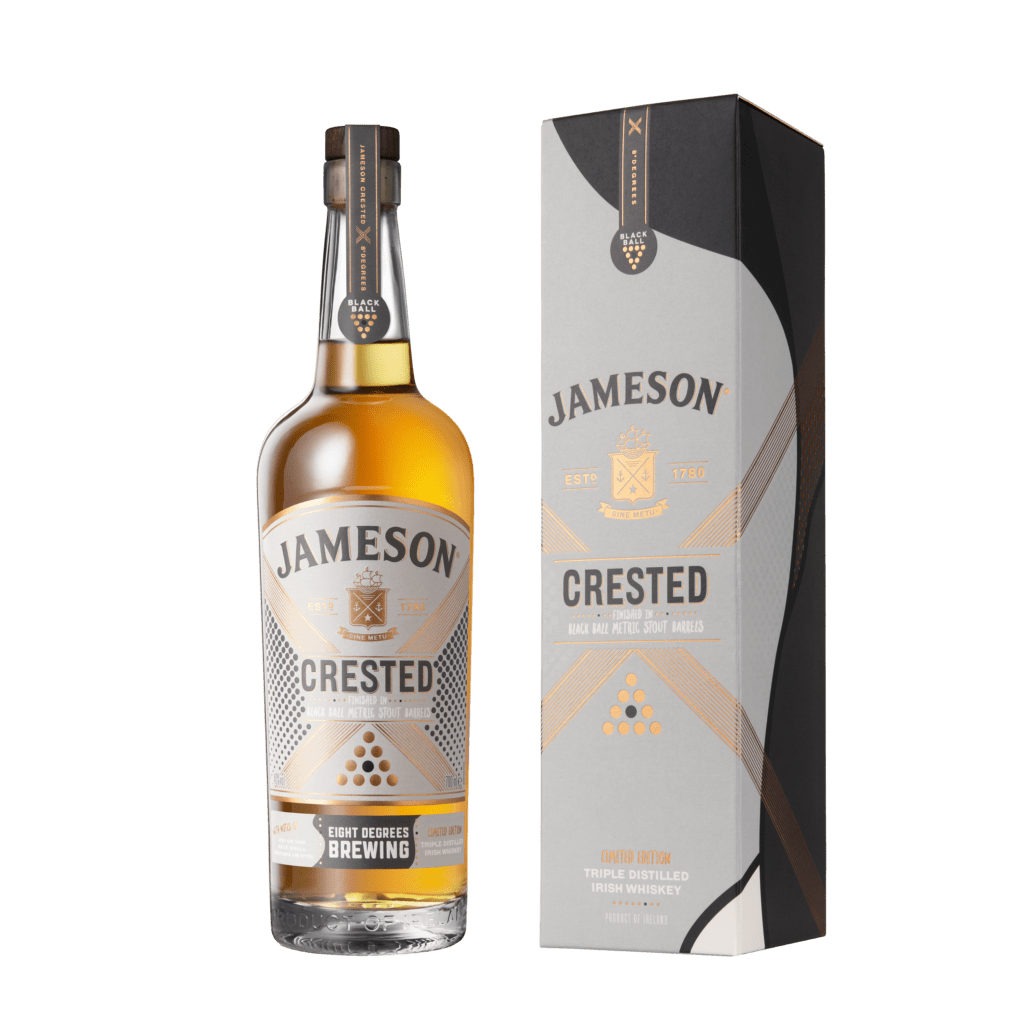 Derek Neville, Head Cellarman at Eight Degrees Brewing adds: “It was an honour to be given the opportunity to create our special 8th anniversary stout using barrels from Jameson, the world’s most popular Irish whiskey. Today we are delighted to have made our mark on Jameson Crested, an icon of Irish whiskey, through the release of this special edition.”

A limited-edition release of fewer than 10,000 bottles globally, Jameson Crested Finished in Black Ball Metric Stout Barrels will launch in Jameson’s brand home outlets at Bow Street, Dublin, and Midleton, Cork, this month, and will be available through Jameson’s online shop at jamesonwhiskey.com, priced at €45 (70cl)[1]. It will also be available to air passengers vising the new Dublin Airport shop in Terminal 2 from mid-October.