Despite the fact that the Irish have been distilling for (marginally) longer than the Scots, Scotch is a world leader in the whiskey industry, where Irish whiskey somewhat falls behind. It’s not just taste that has an effect on whisky sales, history has a big part to play. As well as the impact of taxation and the introduction of new technology such as the Coffey still, the Irish whiskey market shrunk in the 1800s. Scotch boomed and became hugely popular.

The Scotch industry had its own pitfalls, with the Pattison Crash and WWI causing production to increase significantly. However, the key to understanding how Scotch rose again and became the world leader in whiskey production, is by understanding what came next.

With the prohibition era taking off in the US, Scotch exports only decreased by less 3%. That’s quite significant, considering that the whole of America had supposedly became dried up. It’s important to note, that imports of Scotch to ports surrounding the US, like Canada, the Bahamas and Mexico, increased hugely during this time. Canadian exports went up around 400% and the Bahamas a whopping 40,000%.

At the same time, Scotch grew in popularity. With its main competition being home distilled spirits or whatever smugglers could manage to get their hands on, Scotch became even more popular because of its quality. This meant that when prohibition finally ended, Scotch was the drink of choice for many Americans. 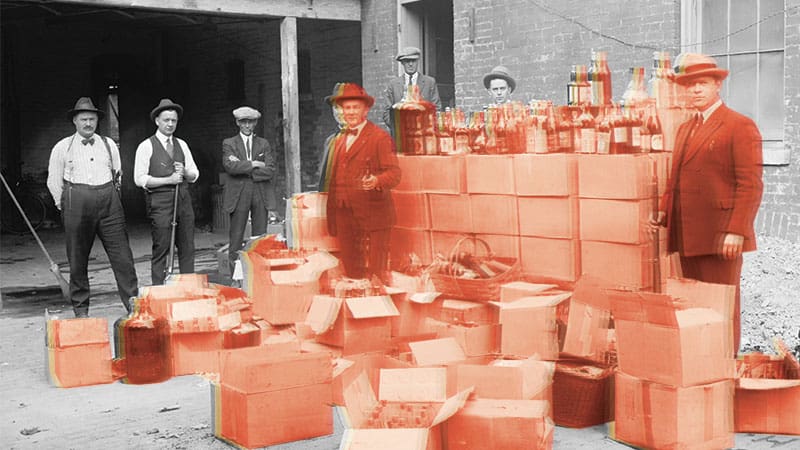 While the first World War may have had a detrimental impact on Scotch, Churchill was careful not to allow the same thing to happen, especially since the market had great economic benefits for the UK. After the war, it would be important to rebuild the economy and Scotch would play a big part of that.

Churchill allowed distillers to continue to create Scotch and did not requisition barley during this time. Part of the US’s war reparations for entering late was also that they would buy more Scotch. This is significant, as it meant that Scotch was able to continue producing during the war, and that Scotch sales boomed after it.

Many believe the Scotch became more popular after the war due to American soldiers taking it back with. However, it is more likely that the economic strategy of the UK government at the time had more to do with it.

Where’s the Irish in all this?

Ireland didn’t take part in the Second World War but their exports still suffered. German U-boats targeted boats from Ireland as much as anywhere else, meaning they couldn’t export as freely as they wanted.

The Irish whiskey industry was still reeling from the downturn in the 1800s and had made the conscious decision not to import to America during prohibition. This meant their reputation had suffered and sales dried up. Distilleries across the country shut their doors, with no hope of opening up again. It also didn’t help that people making cheap, low quality moonshine often called it Irish Whiskey, giving the spirit a bad name. While Scotch might still hold the crown in the whiskey industry, Irish Whiskey is growing at break neck speeds. It is currently one of the fastest growing spirits categories in the world, and with a 300% increase in the industry expected, it promises to stay like that.

The question is now, however, will it even be enough to knock Scotch off its pedestal? Watch this space to find out! What are your thoughts on the dominance of Scotch over Irish Whiskey? Start the conversation in the comments!