Bruichladdich. Yes a distillery, but more importantly a family.

A bright October morning dawns and it was just another day for the residents on the island of Islay. However this was no ordinary day for me! It was my turn to visit the Camelot of the 8 distilleries this magical island has to offer. It was of course time to zip around Loch Indaal and visit the Bruichladdich Distillery.

Not only that but I was on my way to a 10am appointment with the Merlin himself of the castle Jim Mcewan. I had been up late the previous night finalising my various questions for this special interview. I wanted to make sure I was definitely going to be asking the right things at the appropriate time as this was certainly no regular interview. I checked in with the delightful Mary in the Laddie Shop who informed Jim of my arrival.

From there in the shop across the courtyard to Jim’s office which had the single best view over the glistening Loch Indaal in the morning sunshine. Was I nervous? Yes of course! This was the guy who has created the best whiskies Islay and may in my opinion say Scotland has to offer. So here I was sat in Jim Mcewan’s office staring at the various awards and prized pictures on the wall.

After introducing myself Jim simply said ‘OK Shoot’ so in which I asked what it was that brought him into the whisky industry initially? ‘You’re taking me back 50 years? Jim replied. He then went on to tell the story of him as a Bowmore born lad peering through the mesh covered windows of the malt barns at the Bowmore Distillery on his way to school. He had the intention of going to school of course but was incited by the malt-men to skip class for helping them on the malting floors. Too good-an opportunity to miss considering it was for money!

So off he went to work on the floor and in those days the distillery staff smoked and consumed their fair share of drams on shift so it was an awkward conversation between young Jim and his mother when he was asked how his day at school was and who he replied so often about learning the history of the Battle Of Bannockburn and the fact that he smelt of smoke, alcohol which came from the grown up’s working in the distillery. No tea for you tonight his mother remarked! Not that this bothered Jim too much he as he had money in his pocket so was king of the world! When Jim was old enough he managed to become an apprentice cooper which in those days was no easy achievement as there was only 1 apprentice to 6 qualified coopers. So in 1963 Jim began his training under the wise guidance of Davie Bell. Davie was like a father to Jim and taught him everything he knew.

When Davie sadly passed away Jim inherited his traditional coopers tools which he then kindly donated to the Bowmore distillery and to this day are proudly on display in their famous No1 Vaults. After reminiscing with Jim further about his involvement with Bowmore I then decided to ask what it was that lured him across Loch Indaal to the then mothballed distillery in Bruichladdich.

It wasn’t the fact that it was a fresh challenge but that Jim and the whole of the island felt deeply hurt that Bruichladdich was thought of as ‘Surplus to requirements’ and closed down.

So when the consortium from Murray Mcdavid led by Mark Reynier approached Jim to help them build a new Bruichladdich he jumped at the chance. He said very clearly to me that when he was sitting in the distillery at Bowmore peering over to the silent Bruichladdich he said that one day he was going to get that distillery going again. And of course he did! and did so in a massive way. Jim stated that Bruichladdich was like Cinderella that didn’t get to go to the ball but now has and has gone to the ball big time!

The most memorable part of the interview was when Jim mentioned about the buyout by Remy Cointreau. The distillery was sold for a whopping £58m which has benefited all of the distillery staff as when they began production again back in 2001 the staff were all given shares so you can imagine the happy faces when the deal went through with Remy. Jim met with the hierarchy from Remy whom complimented Jim and his staff for their amazing achievement with Bruichladdich. Jim’s memorable response was that there are no staff here, we are a family!

I think that’s what has made the difference compared to some other distilleries as when the staff are united as a family surely the passion is far more tangible and the end product far more quality? For me Bruichladdich are the pinnacle of brilliance when it comes to their products. They are made with heart and soul. I could digress at this stage but lets move onto the other parts of this superb visit.

After enjoying a fantastic group tour led by the well witted Raymond we made our way back to The Laddie Shop to explore a couple of drams plus part with a good chunk of cash! Just as Raymond began his speech describing the various tastings on offer Jim popped his head round the corner and after grabbing my attention whipped me away into the Bruichladdich van and up to the various warehouses above the distillery that are not part of the regular tour. Jim led me through many huge warehouses full of that fabulous flavoursome nectar we all know and love. It was great to see some casks in there containing expressions we loved and savoured but have now been discontinued.

Not many but enough to maybe warrant a special limited release at some point along their journey? That’s me speculating but we will see. I was then led through to see a single cask that is particularly special to Jim. It’s contents were unique and will never see the shop shelves as this is Jim’s personal whisky maturing away for now 22 years. It has no official name or at least not that I recall but this whisky was specially selected by Jim and has been clearly exposed to more than one cask.

I was honoured to be given a dram of this whisky. It’s like no other malt I have ever sampled to date.

Yes this was a Bruichladdich whisky which had a certain delicacy about it due to those famous tall stills, but this however sported serious intense fruit aromas and flavours. Jim then led me back to the still house which I had visited earlier on the group tour. What could have been better? The Merlin of malt was taking me though the tasting notes of this amazing dram that I shall clearly never sample again.

Not only that but because the warehouse was cold the dram was rather closed in, so exposing it back to the warm still house that gave birth to it enabled the subtle heat to penetrate in and open up those amazing fruit aromas. After a good while Jim and I parted ways leaving me plenty to write about with this article as you have read.

How can I sum up this visit experience? It has to be simply one word.. Legendary. I have to congratulate Jim and the Bruichladdich family for creating what is in my opinion the ultimate Islay malt. Yes that’s a controversial comment if you’re accustomed to other Islay brands. But my opinion I have to say is backed up by expressions of whisky that have so many varying characters made with love by local Ileach people who love what they do and love sharing it with us humble consumers.

On a personal note I’d like to thank Jim and the Laddie family for such a memorable visit. I can’t wait to come again and a special note to Jim with regards to that unbelievable dram, Those amazing flavours won’t be forgotten and neither will she! Sláinte. 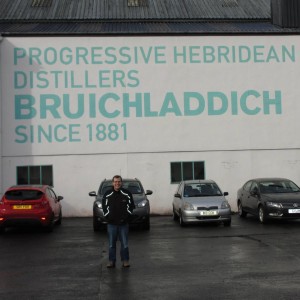 5 thoughts on “Bruichladdich. Yes a distillery, but more importantly a family.”