AUCHENTOSHAN® IS RALLYING BARTENDERS TO JOIN ITS GLOBAL COLLECTIVE, THE NEW MALT ORDER 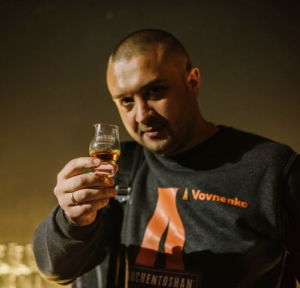 3 May 2018: Auchentoshan® is on a mission to find creative bartenders to join its international bartender collective as it announces the launch of its New Malt Order 2018 competition.

Launched in 2016, the New Malt Order is a growing community of like minded bartenders who share a passion for shaking up the world of single malts.

The urban malt from the city of Glasgow, is challenging entrants to create a cocktail that captures the essence of its triple distilled malt whisky and takes inspiration from the bartender’s home city. Successful bartenders will be given the once-in-a-lifetime chance to visit the home of Auchentoshan® in Glasgow, be immersed in the city’s culture and create an exclusive liquid with Master Blender, Ron Welsh (pictured below). The winners will go behind the scenes at the distillery and select from casks, blend, bottle and even have their say on the final packaging of this rare and unique single malt. This year Auchentoshan® will celebrate its urban heritage and challenge bartenders to share their own city’s unique character captured in an Auchentoshan cocktail. The competition is now open and bartenders from the UK, Canada, Russia, Australia and Germany are being encouraged to enter via Instagram for a chance to become part of the New Malt Order global collective.

Judged by the best in the business, winners of this once in a lifetime experience will be announced this September.

THE NEW MALT ORDER Launched in 2016, The New Malt Order is not only a competition but a growing global community of passionate bartenders who are pushing boundaries, breaking rules and taking single malt whisky to new places and new faces.

In 2016, the inaugural 12 bartenders from some of the world’s best bars designed a punchy 47% ABV malt to stand-up in cocktails including Bobby Burns, Vieux Carré, and the classic Old Fashioned. Bartenders’ Malt 02, created by 2017’s cohort of international bartenders, will be released exclusively to the on-trade later in 2018.

“We’ve put together a blend that matches their requirements as bartenders, so nice high strength and lots of flavour. It’s one of the best Auchentoshan®’s I’ve ever tasted.”

Charles Roche from Scout in London, a member of The New Malt Order:

“Being a member of the New Malt Order is amazing. It’s about blending a whisky by bartenders, for bartenders.”

Scott Milne, International Brand Manager, Beam Suntory: “We are excited and proud to announce that Auchentoshan®’s New Malt Order competition is returning for the third consecutive year in 2018. We are passionate about building an army of single malt advocates and championing creative bartending on a global scale. We’re looking forward to seeing how the entrants capture their city in a cocktail and welcoming the winners to the home of Auchentoshan®.”

The competition is open from Tuesday 1 May, with entries to be submitted by Saturday 30 June.

1. A photo of a cocktail that embodies your city (no branding or people to be included)
2. Tag @theauchentoshan and use #newmaltorder so we can track your entry
3. Tag your bar (e.g. @scoutldn)
4. Post details of your cocktail’s ingredients and methodology
5. Post an outline of your City inspiration behind the cocktail

To find out more and to enter, visit
www.instagram.com/theauchentoshan or www.auchentoshan.com/newmaltorder

Reviewing the Gordon & Macphail Speyside Collection , what a treat

1 thought on “AUCHENTOSHAN® IS RALLYING BARTENDERS TO JOIN ITS GLOBAL COLLECTIVE, THE NEW MALT ORDER”