The latest single malt in a series of timeless classics to emerge from the Gordon & MacPhail warehouse has been revealed.

Honouring Mr George Urquhart, a member of the second generation of the company’s owning family and the man who helped bring single malt whisky to the world, the Gordon & MacPhail Mr George Legacy 1957 from Glen Grant Distillery is the second expression to be released as part of the whisky creator’s annual Legacy series.

It was laid down 64 years ago while ‘Mr George’, as he was known to those who knew him best, was at the helm of the business. Only 298 bottles of this single cask whisky are available, highlighting the scarcity of this rarely seen vintage from Speyside’s Glen Grant Distillery. 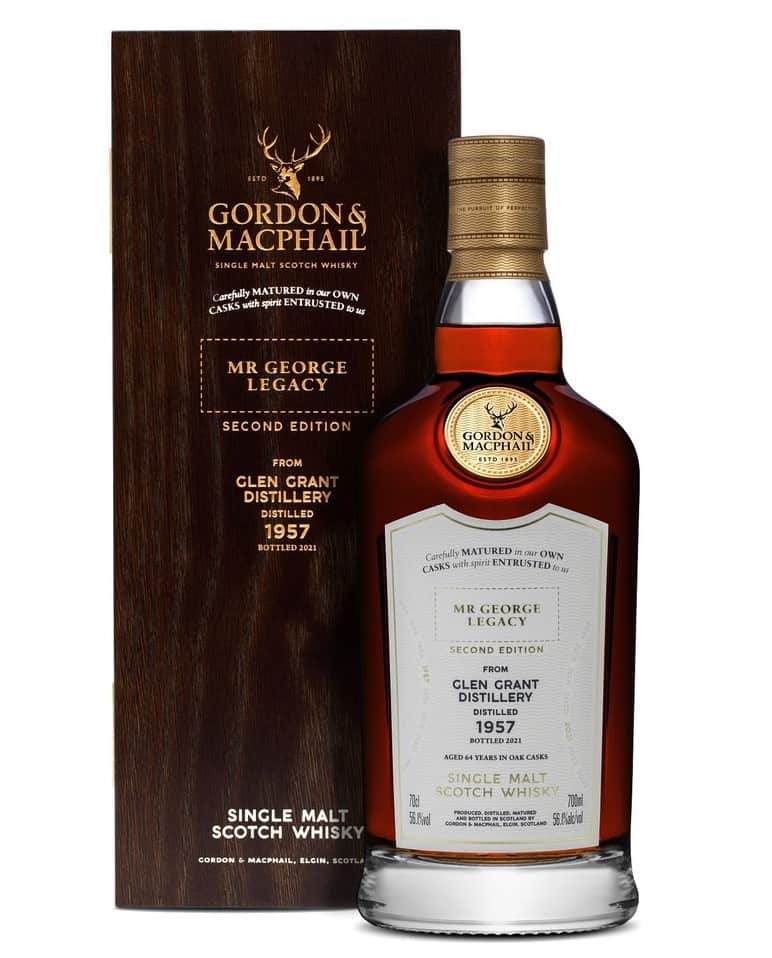 The Mr George Legacy 1957 from Glen Grant Distillery celebrates Mr George’s long-term approach to maturation, where he was guided by the philosophy that whiskies take as long as they need to mature into the perfect dram. Achieving great quality and flavour takes time, and patience and trust in the process is still very much at the heart of Gordon & MacPhail’s ethos today.

On the nose, the rich mahogany whisky releases aromas of fruitcake, festive spices, marmalade and treacle. To taste, notes of morello cherries, tobacco and garden mint greet the palate, followed by ripe red apple, citrus peel and subtle aniseed. It finishes in an explosion of flavour, with lingering notes of spice, forest fruits and charred oak.

As the second whisky in the Legacy series, the Mr George Legacy 1957 from Glen Grant Distillery celebrates the expertise and patience required to match cask to spirit for long-term maturation.

Stuart Urquhart, grandson of Mr George and Gordon & MacPhail’s Operations Director, said: “In some industry quarters my grandfather was fondly thought of as slightly eccentric due to his relentless focus on maturation, painstakingly selecting the right cask to match with each particular spirit. He was intrigued to know how long the whisky might take to reach its peak and would have known he might not be around when that moment came. That is his legacy to our family and to whisky drinkers who love the rich complexity of the ultra-aged single malts he laid down decades ago.

“The latest release in the Legacy series comes from Glen Grant distillery, for which my grandfather had a particular affinity. Local to us in Speyside, Glen Grant was the first distillery to use a purifier in distillation which resulted in a lighter spirit. Back in the 1950s, the spirit would have been slightly smoky due to floor maltings and a small level of peat being used – which is a style rarely seen in today’s modern Speyside whiskies – giving this whisky a charred oakiness that is perfectly balanced by long-term maturation in a Sherry cask made of American oak.”

Charles Maclean, whisky expert, noted: “This is a gorgeous whisky, rich and multi-layered, still vibrant and vital in spite of its great age. A worthy tribute to the man who first drew the world’s attention to the glories of single malt – Mr George Urquhart”.

Celebrating its 125th anniversary in 2020, Gordon & MacPhail has built up an impressive collection of whiskies from over 100 distilleries housed in its liquid library, a testament to the close relationships forged with Scotland’s distilleries over many decades.