Bringing whisky back to Glasgow, the Glasgow Distillery Company are releasing some really interesting malts.

Distilleries exist all over Scotland. The country has over 100 distilleries, with most of them being concentrated in the Speyside region. At one point in time, there were distilleries and illicit stills in every nook and cranny across Scotland. Today, as many new brands of Scotch are established, the names and sites of these stills have been used for branding.

This isn’t uncommon across the whisky world, where companies will revive a distillery name and the history that goes with it. Many big names have done it and have released excellent malts under historical brand names.

With the new brand has come a whole range of new spirits, including a Gin, Whisky, Vodka and Rum. They also have a special blended whisky, sourced from an anonymous distillery in Speyside.

One malt in particular is especially compelling – the Peated Batch No.1. Made from paeted barley, this is a great malt for those who enjoy gentle hints of peat with their whisky. 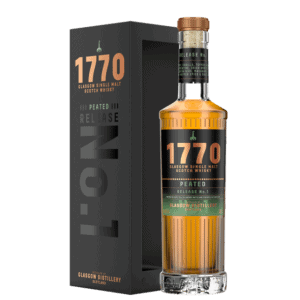 The nose begins with notes of caramel, vanilla and toffee. It is well rounded and quite sweet. Fruit notes appear, as does a wonderful oaky flavour.

The palate is rich and full of peat, but not overwhelmingly so. Smoke wafts throughout and combines well with citrus fruits and a dash of spiciness. More caramel notes appear, with lovely dark cherries.

The finish is smoky and soft, combining fruit and peat perfectly.

With promise of further batches to come, this is a wonderful malt with the perfect amount of peated notes throughout.

Have you tried the Glasgow Distillery Peated Single Malt Scotch? Let us know your thoughts in the comments!