Do you ever consider the bottle your whisky comes in? Here at GreatDrams we like to take a closer look at all aspects of our favourite whiskies. That of course includes the glass that surrounds that precious golden liquid, so without further ado, here is the GreatDrams Top 10 Whisky Bottles. Georgia Moon does not shy away from its moonshine roots. At only 30 days old, this is possibly the youngest spirit on the market. And the jar it comes in only serves to remind us of that. As simple and inelegant as it may be, the jar really works. This is moonshine after all, so why not continue the theme right down to the very container it comes in? Hailing its Japanese roots, the Nikka Samurai bottle is intricate and exciting. The dram itself may not be one of the greatest to come out of the Japanese distillery, but the bottle alone is worth investing in. It embodies the heritage of its country of origin and brings together whisky and the warrior spirit. This is a fantastic bottle to add to any collection and really stands out as an impressive bottle. 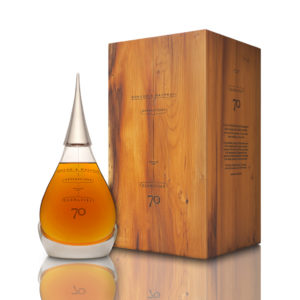 With an incredibly impressive age statement comes an even more incredible bottle. The Glenlivet 70-Year-Old comes in the shape of a single water droplet and is presented in a neat wooden box. This bottle represents the essence of the liquid, creating nuances between the packaging and the nature of uisge beatha, “water of life”. This bottle brings together sleek minimalist design as well as the very essence of what whisky is. There are so many different elements to the limited edition Chivas Regal Vivenne Westwood packaging. For the proud vintage British flag wrapped around the bottle to the blue tartan ribbon slung around the neck. This bottle pays homage to more than just the Scottish roots of Chivas Regal, but also to the British roots and the long history that goes between the two.

The design of the Bruichladdich bottle is simple. It is a deviation away from the normal whisky bottle shape that includes a long body and a bulge at the neck. The Bruichladdich bottle transports its whisky into the 21st century. It is bright with clear and straight lettering that gives you all the information you need to know. It may not be one of the most elaborate bottles available, but I have to say it is one of my favourites. 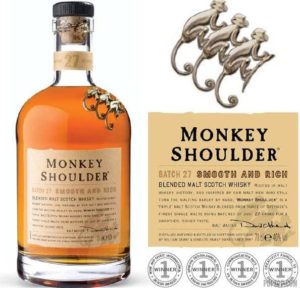 Again, this bottle has a simple design, but it is one that holds both the attention and intrigue of the drinker. The first time I encountered Monkey Shoulder I couldn’t believe it was a Scotch blend, I though it was something much more exotic and rare. The bell shaped bottle with the minimalist label and three monkey metal embossment just stood out of the shelf. It looked new and refreshing against the other, more traditional bottles that surrounded it. It may not be too elaborate, but it definitely owns its look and serves a great dram to boot. A relatively unknown brand from the rolling hills of the Rocky Mountains (the American side), the bottle this dram comes in is uniquely its own. With a distinct six sided shape, this bottle is also embossed with the brand name and emblems. The most exciting part of this bottle is perhaps that its cap doubles as a literal tin cup. This is throwback to the days when miners would drink from tin cups. It captures its own history and moves that history forward, allowing new drinkers to connect with the past it seeks to emulate.

Another of my favourites, and a more elaborate choice, has to be the Highland Park Valhalla Collection. Named after the major players in Ancient Norse theology, Odin, Thor, Loki and Freya, these bottles are presented in a similar theme. The bottle is surrounded with a wooden frame that emulates Norse longboats and captures the powerful gods and goddesses that it is paying homage to. Who could say no to a whisky that comes in its own boat? Another offering from Highland Park, only this time the bottle is a lot more intricate. It holds some very special liquid, and is the perfect vessel to do so. The Highland Park 50-Year-Old bottle is a mass of branches, intertwining and overlapping, with different textures and shades. Presented in a wooden box this bottle is definitely worth adding to your collection, not only for the precious liquid inside, but also for its unique interpretation of the Highland Park whisky legacy. The Bowmore 1957 is truly a masterpiece in glass. The swirling waves created on the bottle serve to capture the rocky, coastal home of the distillery, as well as the fierceness within its drams. This bottle brings the Islay whisky back to its very nature, in both water and wave, connecting the essence of whisky with the wild shores that surround it.