The History of American Whiskey

American whiskey’s place in culture and history was cemented long before prohibition, and will last long into the future. We take a look back at the history of American Whiskey.

During George Washington’s presidency the country started out in the red after war debt, around the country there were commercial whiskey distilleries established but these were essentially groups of farmers distilling whiskey using the rye they were harvesting. This was the coal face of the frontier; a no cash economy that used whiskey as a barter tool for sheep and livestock at markets. Alexander Hamilton, the US’ first Secretary of Treasury, was tasked with generating revenue to get the country back in the black so and came up with 1791 Federal Whiskey Tax to get cash into the economy. As a true capitalist, he was interested in building the commercial ventures into big companies and these distilling farmers refused to pay as they had been the people fighting on the front line to break the country free from British rule.

This led to the Whiskey Rebellion, a really vital moment in the history of American Whiskey. These farmers continued to refuse to pay tax, they got angrier, organised themselves until 500/600 of them got together and decided to march to Pittsburgh to burn it down. Washington decided to pull together 13,000 troops to make a statement, to show force and to effectively ensure that the farmers were so outnumbered that no shots are fired. By the way, 13,000 is massive as not only was this more troops than were used against the British, but, for context, the population of New York City were only 32,000 at the time. The farmers dispersed around the country, heading south with their leaders tried for treason.

Ironically, at the end of his career, when Washington had achieved his goals and retired post-politics he decided to invest in whiskey! He starts his own distillery with a Scottish distiller and became the largest commercial whiskey operation of its time in the US. The history of American whiskey continues!

When Jefferson became president he was all about small growers and enterprises and abolished Hamilton’s Whiskey Tax; the only time in history where there was no hard liquor tax in the United States.

Lincoln then reintroduced the American Whiskey tax back to generate money in order to fight wars. He was a temperance man, or as I’d probably describe him; a boring bastard, so did not want people to drink – or have fun – so introduced the ‘Sin Tax’ to tax whiskey, liquor, pianos, playing cards, feathers, yachts and cigarettes. Essentially anything not fundamental to survival and life. He wanted to rid culture of sin… and smiles by the sound of it.

American drinking of hard spirits at that time was off the charts vs today, seven gallons of hard spirits were consumed per person, per annum as an average. That’s a lot. And basically, due to how society and culture was back then, this stat did not include women, children or the elderly. That’s 19th century American men alone. Wow. It caused domestic abuse and lots of heavy machinery injuries, so it did make a lot of sense to curtail that, tho it does sound like he went to the extreme end of curtailing cultural enjoyments.

A few years later, President Grant needed to know where this tax is coming from, 65% of federal government taxes were from hard liquor in the day. He noticed that in Brooklyn that lots of whiskey was flowing out and not much tax flowing in. This area was known as Irish Town, people who were fleeing the potato famine and a fear of the British were essentially distilling to survive but he decided to put a stop to it.

This led to the Brooklyn Whiskey Wars – Grant authorised tax collectors to station themselves outside the Navy Yard where the Kings County Distillery is based to collect tax, backed by hundreds and then thousands of marines. They didn’t know where the stills were so knocked doors down, dragging stills out onto the street, the Irish fought back with lookouts spotting marines and throwing Irish confetti, otherwise known as bricks, down on the soldiers. Despite this aggression, there was only one recorded death 1859-1864 which was a tax collector who became the first in his line of duty to lose his life. 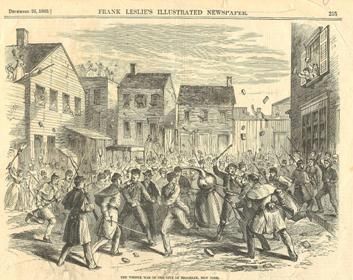 America’s next flirt with whiskey controversy was The Noble Experiment, otherwise known as Prohibition. But thankfully this did not work; a vibrant bar culture of 30,000 known speakeasies popped up that has been inspiring hipster culture for nearly eighty years since. There were downsides though as prohibition created bootlegging, high violence courtesy of the mafia and also the advent of organised crime who made huge profits from booze.

During prohibition, urban distilling, which was a huge part of America’s distilling history and culture, was effectively killed. In 1851 there were six enormous distilleries in Brooklyn alone, producing six million gallons a year. New York was actually accountable for 25% of the national distilling volume pre-prohibition. When prohibition hit, these urban distilleries became other things as there was only so long owners of the properties could hold onto the land without making money on it, and prohibition could have lasted forever, there was no set amount of time it was due to last. 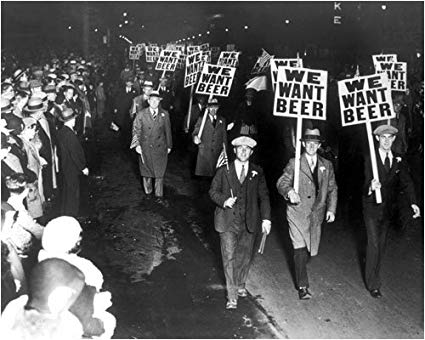 There was an interesting loophole, however, as people could drink whiskey legally during prohibition and certain distilleries could keep distilling if the product was for medicinal usage; people were actually prescribed whiskey, it was the medical marijuana of the day, and no distilleries were operational in New York for many years after.

Thankfully nowadays the distilling culture in America is vibrant, alive and growing week on week with new distilleries popping up and lower costs of entry for licenses, but what a journey they have been on to get here. And now Donald Trump has managed to incite the EU to increase Bourbon taxes 20% in what will probably go down as a footnote in history as the world erupts into a mega trade war.

What’s your favourite part in the history of American whiskey? Start the conversation in the comments!

1 thought on “The History of American Whiskey”