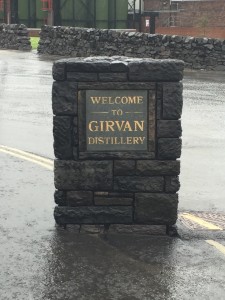 Where the hell do you start with this one? No really, there are so many interesting stories and technical specs that I’m, for once, at a loss.

Let’s just see how we get on.

This is a vast site, we are talking about 380 acres, or for sports fans that would be about 418 football football pitches. There are two massive distilleries sited here; Girvan that produces 110 million litres of spirit per annum and Ailsa Bay that produces 12 million litres per annum as well as all the production facilities for Hendricks Gin and god knows what else.

Despite its vast size, this is a place where brands live and are created. From the Grant’s branded bins to the Girvan branded door handles to boards through the distillery that explain the detailed process stages as well as where everything fits in with the master brands that are based or facilitated here. Why is the Girvan distillery located where it is?

Mostly for a solid water source but Charlie Grant Gordon’s power of negotiation was such that he managed to convince the government at the time that there was so much work needed to be done to make use of this former munitions site that he needed a cost break to balance his investment.

He got it through being charged just 1p, that’s one penny, per 1,000 gallons of water the distillery used. Sounds like a win? It gets better. That charge was protected for thirty years. Incredible.

As with the Girvan Patent Still single grain range tasting that will be published soon, I was on this trip with four other whisky writers:

As well as the brilliantly passionate and interesting Olivier who was our host for the two days we were in Scotland and the font of knowledge that is Kevin Abrook the global brand ambassador for Girvan Patent Still Single Grain.

Our day started with an insightful top line explanation from master distiller John Ross, as to what grain distilling is and the differences between twin column stills and five column stills that have modes for switch between producing grain neutral spirit and whisky. As we were told a couple of times, they look like the famous Coffey stills but are in fact not. On site there are a number of stills; #1 Apps, Apps being a term for ‘apperatus’ in the distilling works, #4 Apps that lends itself to the entry level Girvan Patent Still release and #5 Apps.

Incredibly #1 Apps has been there since day one, over fifty years and still going strong, barring a few part replacements.

We were told how the best analogy for how stills like #1 Apps operate is to think about how cars from the 60s were built; no frills, just get from A to B, get the job done with no fuss. This still is the exact same in principle. Consistent and reliable.

Similarly as incredible was the installation of #4 Apps as this used pioneering vaccuum distilling technology with the ability to alter the character of the distillery remotely (i.e. from screens in the control room) with an immense amount of automation that ultimately saved four to five hours worth of maintenance and cleaning per day.

What happened to #2 Apps I hear you cry… well, it was irreperably damaged in a distillery accident so was retired and deconstructed. #3 Apps was decommissioned along with #2.

What does all of this produce? A pure, fruity, controlled spirit that marries art and science. Want to hear something even more incredible? The stills at Girvan were designed by a farmer who worked for the distillery part time purely because he had a fascination and love for technical drawings and calculations.

Lots of distilleries talk about their recycling, their almost zero wasted process by Girvan, along with Edrington’s counterpart the North British Grain Distillery, sends power back to the grid that is harvested during production.

So for Girvan they produce 5 megawats of power during the process, 4.5 of this is used on site and 0.5 is put back into the grid and used to power homes.

Lots of analytical study is done on site to ensure the spirit is as perfect as it needs to be but what was heartening to hear, and again reminds you that whisky is a people business not a machine business, is that the nose has the final say. No matter what the machine says, the daily nosing panel convene and if they say the spirit is no good, it is no good.

With that the tour was almost over. I’d just like to reflect on the mantra and cornerstone of the whisky that is produced here, whilst this is always going to be contextual, there’s a lovely story of the typical pioneering spirit found in much of the William Grant & Sons history books, this is by no means like the assumtion many folk have around grain distilleries. There is a uniqueness, they really do use science as an aesthetic and the spirit is engineered to perfection. Thanks to the Girvan distillery for hosting us, Olivier, Kevin, John and the team for being great hosts and having more answers than we had questions.

I will leave you with a few few facts: